Who is Troy Stubbs? 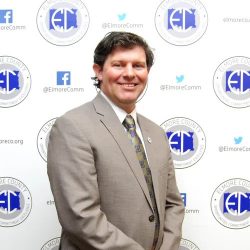 Troy Stubbs was born in Charleston, SC. The son of a college football coach, Troy’s family lived in six different states before he graduated from high school.

Troy was accepted and attended the United States Air Force Academy in Colorado Springs, CO. After 3 semesters at the Academy, he left to serve a two-year volunteer mission for the Church of Jesus Christ of Latter-day Saints in St. Petersburg, Russia. After completing his mission, Troy enrolled at the University of Alabama where he completed a Bachelor of Science degree in Finance. He also holds a master’s degree from the University of Louisville in sports administration, along with a master’s degree in secondary mathematics from Alabama State University.

Troy and his wife Jenny have been married 21 years. They are owners of Frios Gourmet Pops in historic downtown Wetumpka. Troy works as a Financial Advisor at First Community Bank of Central Alabama. They have four children: Isaac, Elsa, Lucas and Bennett.

Troy was first elected to the Elmore County Commission in 2016. Upon joining the commission, he was unanimously elected to serve as chairman of the commission by his fellow commissioners. In 2020, Troy was re-elected without opposition.

The Stubbs are active members of our community. Troy has volunteered as a coach of numerous youth sports teams including YMCA basketball, Dixie Youth baseball, and AYSO soccer. In addition to volunteer coaching, Troy has organized charitable efforts to support the Elmore County HIPPY program, Camp Hope, and the Elmore County Food Pantry. He also serves on the board of directors for Main Street Wetumpka, the Alabama County Commission Association board of directors, and is a member of the Wetumpka Chamber of Commerce. Troy is also a past member of the board of directors for the Wetumpka YMCA.

Troy Stubbs from Wetumpka, AL has participated in elections listed below in the state of Alabama.

The below links are relevant to Troy Stubbs from Wetumpka, AL and are articles or opinion pieces published on Bama Politics. Are you Troy Stubbs? Do you have an opinion on Troy Stubbs? Publish an article in our opinion section and your article will appear here. A great way for our visitors to find your content and learn more about your views. Use this contact form to find out how.