Who is Tyler H. Berryhill? 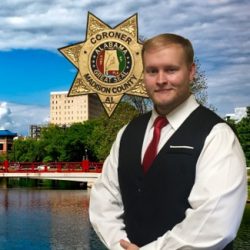 ​Academically, as an alumnus of Jefferson State College of Funeral Services and the University of Alabama College of Human Environmental Sciences, he pursued higher education at the University of Florida's College of Medicine, Gainesville, Florida. During this time, he completed his graduate-level medical education with a specific focus on gerontology and age-related pathology. He was also afforded the opportunity to dual-enroll, completing a multi-year graduate-level study of forensic medicine & forensic toxicology, and continuing on with a graduate certificate specialization in a forensic death investigation. Dr. Berryhill continued doctoral studies, at Nova Southeastern University, in Fort Lauderdale, Florida, in public health epidemiology (a specialty which investigates patterns and causes of disease/injury in humans, to reduce/prevent said occurrences), with a specialized focus on infectious disease.

The below links are relevant to Tyler H. Berryhill from Huntsville, AL and are articles or opinion pieces published on Bama Politics. Are you Tyler H. Berryhill? Do you have an opinion on Tyler H. Berryhill? Publish an article in our opinion section and your article will appear here. A great way for our visitors to find your content and learn more about your views. Use this contact form to find out how.