Who is Valerie A. Abbott? 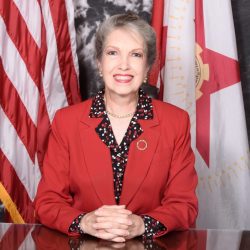 Birmingham City Councilor Valerie A. Abbott is Chair of the Planning and Zoning Committee, and a member of the Administration, Budget and Finance, Governmental Affairs and Public Information, Public Improvements and Beautification Committees.

Her seemingly endless schedule of neighborhood meetings and community events is her way of learning about the needs and concerns of citizens throughout Birmingham and ensures that she is knowledgeable when issues affecting various neighborhoods come before the City Council.

She has collaborated with her fellow councilors and city staff to revise ordinances regulating noise, smoking, and fences. An avid gardener and nature enthusiast, her pursuit of neighborhood health and revitalization has resulted in two community gardens, including a national award-winning project in East Avondale. She is a proponent of all things green, including Birmingham’s recycling program, which is experiencing a rebirth.

Her credentials include a Bachelor’s Degree from the School of Architecture and Fine Arts at Auburn University and a Masters Degree in Public and Private Management from Birmingham Southern College. As an employee of AT&T Services, Inc. for the past 40 years, Council President Abbott has deep roots in the community’s business sector as well as within its neighborhoods. The recipient of numerous volunteer awards from groups ranging from the Civitan Club to the Birmingham Tree Commission, Council President Abbott was named Birmingham’s “Unsung Hero” in 1993.

Known contact information for Valerie A. Abbott from Birmingham, AL.

Known political history for Valerie A. Abbott from Birmingham, AL.

Valerie A. Abbott from Birmingham, AL has participated in elections listed below in the state of Alabama.

The below links are relevant to Valerie A. Abbott from Birmingham, AL and are articles or opinion pieces published on Bama Politics. Are you Valerie A. Abbott? Do you have an opinion on Valerie A. Abbott? Publish an article in our opinion section and your article will appear here. A great way for our visitors to find your content and learn more about your views. Use this contact form to find out how.