Who is Woody Jacobs? 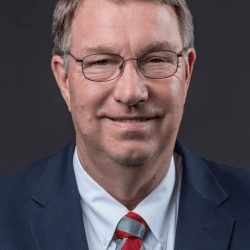 Woody Jacobs was born and raised in Cullman County. His father, Woodrow, owned a small accounting firm and his mother, Dean, served as Cullman County Clerk for several years. After graduating from Cullman High School, he attended Cullman College at Sacred Heart and then went on to earn an accounting degree from the University of Alabama.

Upon graduation from the University of Alabama, Woody returned to Cullman and joined his family business as an accountant, where he specialized in helping small businesses with tax preparation. After working eighteen years in the accounting field, Woody made a career change and joined building contractor Eidson & Associates, where he spent twenty years supervising commercial construction projects. He retired from Eidson & Associates in 2016.

Woody began serving his second consecutive term as Mayor on November 2, 2020. He is happily married to Connie Marie (nee Voigt) Jacobs and is the proud father of son Tyler and daughter Hannah.

Woody Jacobs from Cullman, AL has participated in elections listed below in the state of Alabama.

The below links are relevant to Woody Jacobs from Cullman, AL and are articles or opinion pieces published on Bama Politics. Are you Woody Jacobs? Do you have an opinion on Woody Jacobs? Publish an article in our opinion section and your article will appear here. A great way for our visitors to find your content and learn more about your views. Use this contact form to find out how.