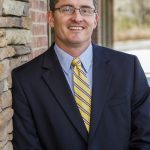 SJR112 193125-3 By Senator Shelnutt RFD: First Read: 15-MAR-18 SJR112 SJR112 ENROLLED, SJR112, COMMENDING DAVID BLACK ON HIS SELECTION AS THE 2018 LOVE THE BUS STATE OF ALABAMA SCHOOL BUS DRIVER OF THE YEAR. WHEREAS, it is with immense pleasure that we commend David Black on his selection as the 2018 Love the Bus State of Alabama Bus Driver of the Year; and WHEREAS, Mr. Black is the winner of the first annual Trussville City School Elementary Bus Driver of the Year, as voted on by students and parents; and WHEREAS, students described him as "strict, funny, caring safe, always has a smile, funny story or a joke when a student is feeling down"; and WHEREAS, overwhelmingly, parents responses included, "I never realized the influence a bus driver has on the children and now I do and I am very thankful to have Mr. Black as a role model for them"; "He is so caring and the kids absolutely love him"; As a mom, I appreciate knowing Mr. Black is kind and strict and that our kids are in a good, safe environment"; and WHEREAS, through the years, Mr. Black has earned admiration and respect for his exceptional character, SJR112 dedication, and concern for the students of Trussville City Schools; and he is truly deserving of this significant honor bestowed upon him; now therefore, BE IT RESOLVED BY THE LEGISLATURE OF ALABAMA, BOTH HOUSES THEREOF CONCURRING, That Mr. David Black is highly honored and commended, and this resolution is offered to him in highest tribute, along with congratulations and sincere best wishes in his future endeavors. SJR112 President and Presiding Officer of the Senate Speaker of the House of Representatives SJR112 Senate 15-MAR-18 I hereby certify that the within Senate Joint Resolution originated in and was adopted by the Senate. Patrick Harris, Secretary. House of Representatives Adopted: 21-MAR-18 By: Senator Shelnutt