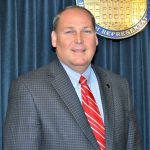 Under existing law, a municipal housing authority consists of five members appointed by the mayor

Under existing law, a municipal housing authority consists of five members appointed by the mayor

(a) An Except as provided in subsection (b), an authority shall consist of five commissioners appointed by the mayor, who shall designate the first chairman chair. None of the commissioners may be city officials. The commissioners who are first appointed shall be designated by the mayor to serve for terms of one, two, three, four, and five years, respectively, from the date of their appointment. Thereafter, the term of office shall be five years. A commissioner shall hold office until his or her successor has been appointed and has qualified. Vacancies shall be filled for the unexpired term. Three commissioners shall constitute a quorum. The mayor shall file with the city clerk a certificate of the appointment or reappointment of any commissioner and such certificate shall be conclusive evidence of the due and proper appointment of such commissioner. A commissioner shall receive no compensation for his or her services but he or she shall be entitled to the necessary expenses including traveling expenses incurred in the discharge of his duties. However, commissioners serving on the authority board located in any Class 7 municipality, as defined in Section 11-40-12, may receive such compensation as set by the council. This compensation is not mandatory and the amount and whether or not such compensation is to be paid is within the discretion of the council. The authority may, in its discretion, refuse to pay any compensation authorized by the council in such Class 7 municipalities. When the office of the first chairman chair of the authority becomes vacant, the authority shall select a chairman chair from among its members. An authority shall select from among its members a vice-chairman vice-chair, and it may employ a secretary, who shall be executive director, technical experts, attorneys and such other officers, agents, and employees, permanent and temporary, as it may require and shall determine their qualifications, duties and compensation. An authority may delegate to one or more of its agents or employees such power or duties as it may deem proper.