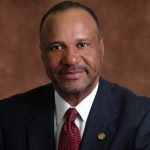 To amend Sections 16-50-20, 16-50-23, and 16-50-27, Code of Alabama 1975, relating to Alabama State University, to remove the prohibition against persons aged 70 and older serving on the board of trustees; to provide further for the authority and responsibilities of the board of trustees and the president of the university; and to increase the number of trustees necessary to constitute a quorum from six to eight.

To amend Sections 16-50-20, 16-50-23, and 16-50-27, Code of Alabama 1975, relating to Alabama State University, to remove the prohibition against persons aged 70 and older serving on the board of trustees; to provide further for the authority and responsibilities of the board of trustees and the president of the university; and to increase the number of trustees necessary to constitute a quorum from six to eight.

(a) There is hereby created a Board of Trustees for Alabama State University, the state educational institution at Montgomery, Alabama. The board of trustees shall consist of two members from the congressional district in which the institution is located and one member from each of the other congressional districts in the state as constituted on October 6, 1975, and who shall reside in that district, four members from the state at large who shall reside in different districts, two of whom shall be non-minority members, two at-large members who may be selected from outside the state, and the Governor, who shall be ex officio president of the board. Except for a trustee at large, the position of any trustee shall be vacated at such time as he or she shall cease to reside in the district from which he or she was appointed. The position of state at-large trustee shall be vacated if the trustee serving in the position shall cease to reside in the State of Alabama. The trustees shall be appointed by the Governor, by and with the advice and consent of the Senate, in such manner that the membership shall consist of at least a majority who are alumni and who have received a bachelor's degree from the university; at least one-half of the board shall be from the prevailing minority population of the state according to the last or any succeeding federal census. The two at large members who may be selected from outside the state shall be appointed in 2015 for initial terms of five years and six years, respectively, and for terms of six years thereafter. Commencing on June 11, 2015, members shall be appointed for terms of six years. All appointments shall be effective until adversely acted upon by the Senate. Provided, however, no trustee who is currently serving on the board or whose term has just expired, who has been previously confirmed by the Senate, shall be required to be reconfirmed for the new term under this section, once appointed by the Governor. Commencing on June 11, 2015, no member may be appointed to serve a second term of 12 years, and no member shall be appointed to serve as trustee for more than a total of 12 years or two six-year terms. No trustee shall receive any pay or emolument other than his or her actual expenses incurred in the discharge of his or her duties as such. No member shall serve past September 30 following his or her seventieth birthday.

(b) No trustee who is serving on the board on April 30, 1986, shall lose his or her seat because of this section; provided, however, the Governor may re-designate the period of the term of these members so as to conform to subsection (a).

c. The president of the student government association.

d. One member of the business community as selected by the Governor.

e. One member of the Montgomery County Legislative Delegation, as selected by the delegation.

f. The president of the national alumni association, or his or her designee.

g. A community representative as selected by the membership of the nominating committee.

(2) Where applicable, members of the nominating committee shall serve at the pleasure of the appointing authority for a period of at least one year.

b. If the vacancy on the board is caused by death, resignation, or the expiration of the term of a trustee who has served for the maximum 12 years of service on the board, the position on the board shall remain vacant until the name of an appointee is submitted by the Governor to the Senate. If the appointee is neither confirmed nor rejected by the Senate during the session in which his or her name is submitted, the appointee shall nevertheless continue to serve in the position on the board until the next session of the Legislature, during which his or her name shall be resubmitted for confirmation. If an appointee is confirmed by the Senate, the term of office for which he or she is appointed pursuant to this paragraph shall be effective retroactive to the date the vacancy was created on the board, for the remainder of the unexpired term if the vacancy was created by death or resignation, or for the entire term if the vacancy was created by the expiration of the previous term. If an appointee is rejected by the Senate, the position on the board shall remain vacant as the nominating and appointing procedure provided in this subsection begins anew and until an appointment is made and confirmed by the Senate. If a trustee is appointed to fill an unexpired term of less than three years, the time shall not be counted toward the maximum 12 years of service.

(5) If the nominating committee fails to submit a list of nominees to the Governor within 30 60 days after a vacancy occurs due to expiration of term, death, resignation, or any other cause, the Governor, by and with the advice and consent of the Senate, may appoint an otherwise qualified trustee to the board, notwithstanding the absence of such nominations.

(d) The board shall provide for the conduct of annual training sessions for trustees regarding the fiduciary responsibility of a trustee to the university and any other topic deemed appropriate by the board.

The board of trustees shall have the power to organize the university by appointing a president or removing a president for cause, whose salary shall be fixed by the board and who shall serve as chief executive officer of the university; and, upon his recommendation, the board shall appoint a corps of instructors, who shall be styled the faculty of the university, and such other officers and professional and operating personnel as the interest of the university may require; and to remove such instructors or other personnel and to fix their salaries or compensation and increase or reduce the same at its discretion; to regulate, alter or modify the government of the university as it may deem advisable; to prescribe courses of instruction, rates of tuition and fees; to confer such academic and honorary degrees as are usually conferred by institutions of similar character; and to do whatever else it may deem best for promoting the interest of the university.

(a) The board of trustees shall appoint a president who shall serve as the chief executive officer of the university and as secretary to the board and shall perform all services as may be required by the board. The compensation of the president, including the emoluments and prerequisites necessary to carry out the functions of the office, shall be fixed by the board.

(b) The board of trustees may act as a body, or may delegate by resolution or bylaw to a committee of the board or to the president, the authority to do any of the following:

(1) Institute, regulate, alter, or modify the organization of the university, subject to the review and approval of the board.

(2) Appoint a corps of instructors who shall be styled the faculty of the university.

(3). Appoint other instructors, officers, and professionals as the interest of the university may require.

(4) Hire personnel, establish and implement personnel rules, and establish policies and practices for hiring, promoting, demoting, and terminating instructors, other personnel, and employees, or for taking any other action consistent with this section.

(5) Fix, increase, or decrease the salaries or compensation of individual instructors and other personnel.

(6) Remove any instructors or other personnel.

(7) Prescribe courses of instruction, rates of tuition, and fees, subject to the review and approval of the board.

(8) Confer academic and honorary degrees as are usually conferred by institutions of similar character.

Six Eight members, exclusive of the Governor, of the board of trustees shall constitute a quorum, but a smaller number may adjourn from day to day until a quorum is present."