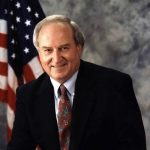 HJR184 189748-3 By Representatives Greer, Boothe, Chesteen, Lee, Morrow, Clouse, Pettus, Whorton (R), Wadsworth, Rogers, Moore (M), Scott and Collins RFD: Rules First Read: 13-FEB-18 HJR184 ENROLLED, House Joint Resolution, RECOGNIZING LEGENDARY COLLEGE BASKETBALL COACH WINFREY SANDERSON FOR OUTSTANDING ACHIEVEMENT. WHEREAS, highest commendations are proudly presented to legendary college basketball coach Winfrey "Wimp" Sanderson for outstanding achievement; and WHEREAS, while serving as the illustrious Head Coach of The University of Alabama Basketball Team, Winfrey Sanderson became the only coach in the program's history to win 200 or more games in his first 10 years, led his teams to average 21.8 wins a year with a 267-119 record and win five SEC tournaments and to make appearances in one NIT and 10 NCAA tournaments and make the "Sweet 16" six times, earned the distinction of Southeastern Conference Coach of the Year in 1987, 1989, and 1990 and National Coach of the Year in 1987; and WHEREAS, Coach Sanderson was renowned for his dapper sideline fashion as he could be seen sporting plaid sport jackets, a tradition that sparked the Coleman Coliseum to be dubbed the "Plaid Palace" and the Million Dollar Band members as the "Plaid Players"; Coach Sanderson possessed an extraordinary skill for recruiting top players; he became the University of Arkansas at Little Rock Head Coach in 1994 and HJR184 led the Trojans to the National Invitational Tournament in 1996; among his accolades were selection as SEC Coach of the Decade by the Lexington-Herald-Leader in the 1980s, induction into the Alabama Sports Hall of Fame in 1990, and selection as UNA Alumnus of the Year in 1990; and WHEREAS, during his collegiate basketball career, he played for Abilene Christian University for his freshman year before transferring back to Florence State, where he earned 1,076 points and averaged 14.9 points over 72 games, served as team captain, and scored 31 points during his best single-game performance against Jacksonville State University in 1958; and WHEREAS, through the years, Coach Sanderson has earned widespread admiration and respect for his tireless dedication and exceptional abilities and has positively impacted the lives of countless athletes; now therefore, BE IT RESOLVED BY THE LEGISLATURE OF ALABAMA, BOTH HOUSES THEREOF CONCURRING, That Coach Winfrey Sanderson is honored and commended, and this resolution is offered to him in highest tribute, as well as with sincere best wishes for continued success in all future endeavors. HJR184 Speaker of the House of Representatives President and Presiding Officer of the Senate House of Representatives I hereby certify that the within Act originated in and was adopted by the House 01-MAR-18. Jeff Woodard Clerk Senate 20-MAR-18 Adopted