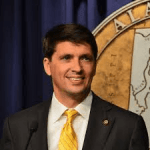 Existing law provides for the regulation of credit unions

Existing law provides for the regulation of credit unions

(1) At a meeting called for that purpose, notice of which purpose must be contained in the call, two thirds of those in attendance voting may vote to approve the merger plan. Voting must be conducted in accordance with the bylaws of the credit union. Notice of the meeting must have been mailed to the last known address of each member of the credit union The notice must be provided to the members at least 15 days prior to the date of the meeting.

(2) After agreement by the directors and approval by the members of the merging credit union, the president and secretary of the credit union shall execute a certificate of merger which shall set forth all of the following:

a. The time and place of the meeting of the board of directors at which the plan was agreed upon.

b. The vote in favor of the adoption of the plan.

c. A copy of the resolution or other action by which the plan was agreed upon.

d. The time and place of the meeting of the members at which the plan agreed upon was approved.

e. The vote by which the plan was approved by the members.

(5) A copy of the certificate approved by the Administrator of the Alabama Credit Union Administration shall be filed with the judge of probate of the county in which each credit union's certificate of organization is recorded.

(6) This section applies to credit unions organized under the laws of the State of Alabama. Federally chartered credit unions may be merged into Alabama organized credit unions, under the same conditions as Alabama credit unions; provided, that the merger plan is approved by the National Credit Union Administration or private insurance program or carrier.

(7) Credit unions organized under the laws of the State of Alabama may be merged into federally chartered credit unions under the same conditions as provided in this section; provided, that the merger plan is approved by the National Credit Union Administration or private insurance program or carrier.

(8) Credit unions organized under the laws of the State of Alabama may merge a state or federally chartered bank or thrift into the credit union under the same conditions as provided in this section, provided that the merger plan is approved, if required, by the appropriate state or federal regulator of the bank or thrift and federal insurer, the Federal Deposit Insurance Corporation.

(9) Credit unions organized under the laws of the State of Alabama may merge into a state or federally chartered bank or thrift under the same conditions as provided in this section, provided that the merger plan is approved by the resultant institution's chartering regulator and the federal insurer, the Federal Deposit Insurance Corporation.

(a) The Legislature finds as fact and determines that the credit unions having their principal place of business in Alabama must keep pace with technological and other improvements constantly being made throughout the United States so as to enable Alabama credit unions to render better and more efficient services to their members. It is necessary and desirable that the administrator be given additional authority in these fields.

(b) The administrator is hereby authorized to expand powers of Alabama credit unions in order to accomplish both of the following:

(d) The administrator may enter into supervisory or other agreements, some of which may be confidential in nature, with the Federal Reserve; the U.S. Treasury Department; the National Credit Union Administration; state credit union, banking, and other regulators; approved private insurance carriers; and other state or federal agencies and furnish to them for their use such reports of examination and other information in taking enforcement and other supervisory actions.

(b) In order to comply with state and federal confidentiality requirements, at any meeting, the Credit Union Board may enter executive session to do any of the following:

(1) Protect the confidentiality of reports or information under Section 5-17-60 and any other provisions of this title.

(3) Undertake any purpose for which a governmental body is permitted to go into executive session under the Alabama Open Meetings Act.

(4) Accomplish any other purpose of the Credit Union Board that requires it to receive or consider information that is confidential under this title.

(5) Comply with any other state or federal law requiring confidentiality.

(a) Except as otherwise provided in this section title or under state or federal law, the administrator, a member of the Credit Union Board, or an examiner or other state employee may not disclose the condition and affairs of any credit union, its supervisory committee, or subsidiaries or other affiliates, ascertained by an examination of such credit union or affiliates, or report or give out nonpublic personal information of credit union members, except as authorized or required by law; provided that this section shall not be construed to prevent examiners and other employees from reporting such information to the administrator or such persons as the administrator may lawfully designate.

(b) Notwithstanding subsection (a), the administrator, at the administrator's discretion, may disclose any information otherwise protected under this section to the members of the Credit Union Board and confer with the members of the Credit Union Board regarding the same and may also disclose publicly such information as is and to the extent necessary to the exercise of enforcement authority or the taking of other supervisory actions pursuant to this title.

(d) No disclosure may be made by any agency or entity furnished with reports of examination or other data pursuant to subsection (c) to any third parties without the prior consent of the administrator. Any disclosure permitted by the administrator shall be subject to such conditions and restrictions as the administrator may require or as otherwise required by this title.

(e) The administrator may also furnish copies of his or her reports of examination and any other information to the board of directors of the credit union, its supervisory committee, subsidiary, or affiliate.

(f) Any reports or information furnished or disclosed under this section shall remain the property of the Alabama Credit Union Administration and, except as provided in this section, may not be disclosed to any person other than the officers, directors, attorneys, and auditors of the credit union, its supervisory committee, subsidiary, affiliate, consultants, or advisors to the credit union or affiliate, and, subject to appropriate confidentiality agreements, persons considering the possible acquisition of, merger with, or investment in the credit union or affiliate. A person receiving such reports or information may not:

(1) Use the report or information other than in connection with the credit union or affiliate, and its business and affairs.

(2) Retain that report or information or copies thereof.

(3) Except as expressly permitted by law, disclose such report or information to any person not authorized to receive the same under this subsection.

(g) All reports of examination, records reflecting action of a credit union, its supervisory committee, subsidiary, or affiliate, taken pursuant thereto, and records and minutes of meetings of the Credit Union Board relating to a credit union or several credit unions, supervisory committee, subsidiary, or affiliate, shall be confidential and shall not be subject to subpoena or inspection except by subpoena from a grand jury served on the administrator."