Who is Casey Wardynski? 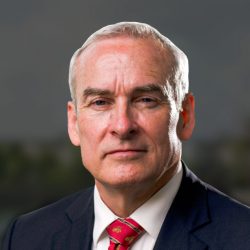 Dr. E. Casey Wardynski served as Assistant Secretary of the Army for Manpower and Reserve Affairs under President Trump. His confirmation by the United States Senate was effective on January 16, 2019, and he immediately began his service in President Trump’s Administration. During his service in the Administration, Casey was responsible for Army personnel policy and supervision of the Army’s 1.3-million-person manpower program. He also supervised the development of a $450 billion five-year defense program for the Army. He created the Army’s first Army People Strategy aimed at acquiring, developing, employing, and retaining the right Army talent.

Prior to serving as a principal official in the Trump Administration, Casey served a thirty-year career in the U.S. Army. After graduating from West Point, he entered training as a Special Weapons Officer at Redstone Arsenal. He then served in Germany, the United States, and Korea. From 1995 to 2010, he served as an Associate Professor of Economics in the Department of Social Sciences at the United States Military Academy (West Point) and led the U.S. Army’s Office of Economic and Manpower Analysis (OEMA) as its longest-serving Director. In that role, Casey provided policy analysis and led policy execution for the Secretary of the Army and other senior Army leaders in areas ranging from weapons procurement and officer retention to talent management and sustainment of the volunteer Army throughout the War on Terror.

Casey created the award-winning America’s Army Game which he home-based at Redstone Arsenal. That project and the Virtual Army Experience, which he also created and based at Redstone, brought entire new industries to Northern Alabama as well as hundreds of millions of dollars of work.

A 1980 graduate of the United States Military Academy, Casey holds a Master’s in Public Policy from the John F. Kennedy School of Government at Harvard University, and a Ph.D. in Policy Analysis from the Frederick S. Pardee Rand Graduate School.

Casey is nationally known as a tech-savvy thought leader and change agent in the government and private sector. From 2016 to 2018, he served as CFO and then CEO of FISH Technologies, an industry leader in the marketing event technology field. In 2018, Casey led FISH through a highly successful acquisition by Providence Equity Group. As CEO of Regenesis Stem Cell Center in Huntsville, Casey is now focused on growing Regenesis into a national center of excellence for high-tech regenerative medical solutions for active adults of all ages.

Casey and his wife of thirty-four years, Susan, raised three children. Following the loss of Susan, Casey married Karen Lee, a national leader in the treatment of adolescent behavioral health issues. Together, Casey and Karen have six adult children who contribute in fields ranging from the military to medicine and veterinary medicine. They also currently have five grandchildren, with a sixth on the way.

Casey Wardynski from Huntsville, AL has participated in elections listed below in the state of Alabama.

The below links are relevant to Casey Wardynski from Huntsville, AL and are articles or opinion pieces published on Bama Politics. Are you Casey Wardynski? Do you have an opinion on Casey Wardynski? Publish an article in our opinion section and your article will appear here. A great way for our visitors to find your content and learn more about your views. Use this contact form to find out how.

The below links are relevant to Casey Wardynski from Huntsville, AL and were found via our own research or sent to us from readers like you. These links are not associated with Bama Politics.