Who is Charlie Thompson? 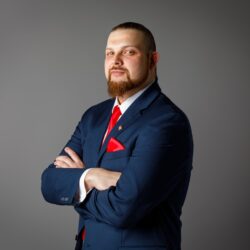 Every candidate for political office says they’re just like you, that they understand who you are. As a candidate for U.S. Representative from Alabama’s 5th Congressional District in Huntsville and the surrounding area, you can count on what I say because I am just like you.

I’m a native of Southwest Huntsville, living in the same neighborhood where I grew up. My single mother and my grandfather raised me. My life has had a lot of ups and downs. As a kid, I was in and out of trouble, but I eventually turned myself around, and graduated from Madison Academy, a private Christian school, in 2004. From there, I went on to the University of Alabama at Birmingham, earning a B.S. in Biology in 2004, later adding coursework in Chemistry from the University of Alabama-Huntsville. When my grandfather was alive, we were an upper-middle-class family, but he passed away before I graduated college, and like many families, we descended into financial ruin. During that time, I worked a variety of odd jobs that included tending a bar, working security and anything to try to make ends meet while attempting to help my mother save her home from foreclosure. We never made it. Even with my help, she lost her home because we could never get ahead of the bills.

As a first-time candidate for political office, I feel that my life experience and constant thirst for knowledge are what qualify me to become your U.S. Representative.

Between 2011 and 2014, I lived in Virginia Beach, Virginia, with my childhood best friend, who was in the Navy. This point in my life gave me a window into how the United States Navy, and more broadly, the United States Armed Forces operate. I also witnessed first-hand how mental health issues can affect one’s life as my friend eventually committed suicide due to issues that remained unaddressed during his time in the service and remain one of my biggest reasons for running for political office. I firmly believe that we need to provide greater support to our Armed Services members, both in their duties while serving our country and in mental health issues. Our current and retired military members deserve our support, going beyond lip service to ensuring that they lead happy and productive lives.

Unlike many people running for office, I am not connected, nor am I independently wealthy. I am like you, trying to make a living. My business experience consists mainly of working in the management in the rental car industry, first as a manager with a branch of Avis Rental Cars in Virginia Beach and then in parking with the Huntsville Madison County Airport Authority after I moved back to Alabama in 2014.

These experiences have shaped me into who I am today and form the basis of who I am. My grandfather, a college professor instilled in me a thirst for knowledge, so I began learning about many different things from when I was five years old, biology, chemistry, physics, you name it. I spend every day studying something. I am an expert on history and military tactics, having read multiple volumes of books. Currently, I am reading the Bible from cover to cover to understand its teachings better. My only goal is to get smarter every day and learn more so I can help our country.

In addition, I am an avid sports fan and enjoy watching every sport. During my time in Virginia, I also helped coach a now-defunct football team at Hampton Roads Junior College, where I also helped mentor these young players in other aspects of their lives.

I am not here to divide but to bring our country together. I am here to bring us all together and to help get rid of the corruption that the Deep State has brought into many aspects of our country.

If you want to change in America then instead of sending another politician to Capitol Hill, you can send something different, something better; an honest hardworking working-class American.

Charlie Thompson from Huntsville, AL has participated in elections listed below in the state of Alabama.

The below links are relevant to Charlie Thompson from Huntsville, AL and are articles or opinion pieces published on Bama Politics. Are you Charlie Thompson? Do you have an opinion on Charlie Thompson? Publish an article in our opinion section and your article will appear here. A great way for our visitors to find your content and learn more about your views. Use this contact form to find out how.