Who is Jonathon W. Horton? 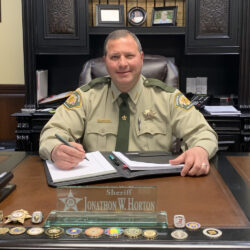 I, Sheriff Jonathon W. Horton, was born at the Holy Name of Jesus Hospital, now Riverview Regional, and reared in Etowah County, where I have lived my entire life, except for my time deployed serving our Country in the United States Navy after graduation from West End High School in 1991. Since graduating High School I have served continuously my Country, State and Community.

My career in Law Enforcement began at the Etowah County Sheriff’s Office in 2002, in the same year I graduated from the Jefferson County Sheriff’s Academy, Class VII. While serving at the Sheriff’s Office, as a Deputy, I served as a Patrol Deputy, Criminal Investigator, Evidence Technician, Crime Scene Investigator and Narcotics Agent, as an original member of the Etowah County Drug Enforcement Unit, where I am Honored to currently serve as a board member. Across my career in Law Enforcement I also served as a part-time Police Officer for the Town of Mountainboro (2003-2004) and the Town or Steele (2010-2011). I became the Assistant Chief of Police for the City of Glencoe in October 2011 and was appointed Chief of Police for the City of Glencoe in February 2012 and served until March of 2016 at which time I was hired as Deputy Chief of Police of the Rainbow City Police Department, where I was later appointed as Chief of Police in May of 2016 and served until Elected Sheriff of Etowah County in 2018 and began proudly serving as Etowah County’s 31st Sheriff in January of 2019.

I am an Honorable Veteran of the U.S. Navy and Alabama Army National Guard. I served my country in the U.S. Navy from 1992 until 1996 as an Aviation Electronics Technician stationed at Naval Air Station North Island, San Diego, CA. After receiving an Honorable Discharge from the U.S. Navy, I returned home to Etowah County and went to work for my father in the family-owned funeral business at Village Chapel Funeral Home. After receiving Funeral Director Licensing in 1998, I missed serving in the Armed Forces, in 1999 I enlisted in the Alabama Army National Guard as a member of the 152nd Armor Division and later 258th Chemical Company, Gadsden, AL and served until 2003.

I have served my community as a Licensed Funeral Director in the State of Alabama since 1998 and currently practice part-time at Glencoe-Hokes Bluff Funeral Home which, until 2020 was my Family’s Business. I began, owned and operated Mortuary Transport Services from 2007-2012. I also have had the pleasure of being an active participant in many civic organizations and have held offices including being a Member of the Alabama Association of Chiefs of Police (AACOP), Past President of the Alabama City Lions Club, Past Chairman of Alabama City Merchants Association and Past Chairman of the Clayton Cemetery Committee.

I currently serve on various Boards including the Etowah County Drug Enforcement Unit Board, Etowah County Community Corrections Board, Etowah County E-911 Board and the S.P.A.N. (Special Programming and Networking) Advisory Board. I am an active member of the Alabama Sheriff's Association. I earned an associate degree in Criminal Justice from Gadsden State Community College in 2007, majoring in Criminal Justice. I am a Certified Arson Investigator and Evidence Property Technician and in addition have completed extensive training in courses including Narcotics, Criminal Investigations, Homicide and Death Investigations.

I have been honored to serve my first term as Your Sheriff. It has been the pinnacle of my law-enforcement career. My first term as Sheriff of this Great County has been humbling, educational and successful in many arenas. We have increased our School Resource Deputies and invested in Our Children in many ways to help educate our children and our future about the rewards of making good decisions. We have been successful in getting an Act signed into law by the Governor and Ratified by the Citizens to allow us to use 100% of Left-Over Food Funds each year toward School Resource Officers and Law Enforcement Purposes (Act 19-165). We have purchased and upgraded our equipment for Patrol Deputies and replaced many delipidated vehicles. We have made our Jail much more secure and added much-needed technology such as X-Ray machines to deter contraband. We have invested in Training and New Policy and Procedure Manuals to increase our effectiveness and efficiency as Law Enforcement Professionals. We have worked to obtain the largest increase in pay for our Correctional Deputies in over two decades collectively to increase our retention. We have increased our outside contracts with the Detention Center and funded the IMPACT program to reduce jail recidivism and give individuals the tools to become productive citizens. I am now asking humbly for a Second Term to SERVE as YOUR Etowah County Sheriff and to continue to fight Drugs and Crime while Educating our Youth and providing opportunity for ALL Citizens of Etowah County to enjoy this place we call Home. I will continue to work hard for every citizen and put the safety of our communities as my highest priority.

Jonathon W. Horton from Rainbow City, AL has participated in elections listed below in the state of Alabama.

The below links are relevant to Jonathon W. Horton from Rainbow City, AL and are articles or opinion pieces published on Bama Politics. Are you Jonathon W. Horton? Do you have an opinion on Jonathon W. Horton? Publish an article in our opinion section and your article will appear here. A great way for our visitors to find your content and learn more about your views. Use this contact form to find out how.