Who is Lynda Blanchard? 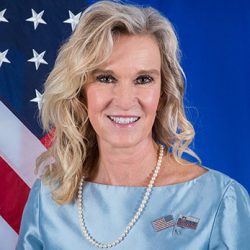 Lindy Blanchard’s Alabama roots run deep. Her ancestors were some of the first settlers in the region, long before Alabama became a state. Her family planted three different Church of Christ churches in the state. Her family saw to it that she grew up with a firm foundation of faith in God.

As a child, Lindy and her family lived in a trailer in Wetumpka. She grew up swimming in the Coosa River and gathering with her family after church on Sundays to eat, play dominoes and play badminton. Until she was asked by President Donald J. Trump to be America’s Ambassador to Slovenia, she had spent her whole life in Alabama.

Lindy graduated from JD High School. Soon after her graduation, she married John Blanchard. When they married, Lindy became the ‘instant mom’ of two-year-old Christopher. Lindy worked full-time while John finished his degree, then took on odd jobs so they could pay off his student loan by the time Lindy was twenty-eight.

Lindy and Johnny’s first years together were financially tough. As she will tell you, she was happy to deposit $1.12 each month in her checking account while Johnny was in school and Lindy was earning a minimum wage.

At age twenty-eight, Lindy sold her car and bought a used yellow Bonneville for $500 so the family wouldn’t have a car payment. She drove it back and forth first to AUM, then to Auburn University. Lindy’s college years were hectic as she juggled classes, cooked dinner, completed homework, put the kids to bed, and woke up the next morning to do it all over again. Her dedication paid off at age thirty-one when she graduated with a degree in Mathematics and a minor in Computers, with a specialization in computer languages.

Lindy’s original plan was to go into actuarial science. However, one evening while sitting around the kitchen table, she and Johnny decided on a different path. Johnny was working for an apartment management company, and the couple saw the potential for growth in that industry. Lindy and Johnny decided to take a leap of faith and start a business of their own together–managing apartments and later apartment complex acquisitions and syndications. This was a true family business. Johnny’s mother was their first employee and Lindy was seven months pregnant when they started.

With hard work, perseverance and a bit of luck, the company did well. They were able to expand from Alabama across the Southeast. After the death of their oldest son, Christopher, Lindy became very active in supporting one of her main passions–children’s needs–both in Alabama and around the world. Lindy co-founded the 100X Development Foundation in 2004 to foster creative solutions to fight poverty and improve the lives of children around the world. She served as CEO of 100X and was actively involved in shaping and approving the goals and priorities of the Foundation.

Lindy has worked in Alabama, Africa, Asia and South America engaging with other organizations and local partners to establish orphanages, sustainable development programs and food production companies. 100X supports multiple charities and groups that serve children and vulnerable populations across Alabama. Her work with the Foundation has improved the lives of thousands of children and families in fifteen countries and here at home.

For more than twenty years, Lindy has been a volunteer on boards and supported numerous education programs in Alabama. She has also worked to help families going through the adoption process, where she is able to bring her own experience of adopting six children to this meaningful work. Lindy and Johnny had a son Ben at age twenty-two and a daughter Hailey at age thirty-two. At age forty-eight, Lindy and Johnny grew their family when they adopted five children.

Two years later, Lindy began working to adopt Shrea from India. She was a special needs child who had been diagnosed with biliary atresia, a disorder of the bile ducts that could be corrected with minor surgery. However, since she was an orphan, she could not receive the care she needed. Lindy arranged for a specialist surgeon. Emory University Hospital was standing by to receive the medical jet that would have brought Shrea from India, but it was then that God called Shrea home five days before she could be flown to America to be with her new family.

Shrea’s death from such an easily-corrected illness when she was so close to receiving the care she needed devastated Lindy. This tragedy propelled Lindy to work even harder to help children in need. Four months after Shrea’s passing, Lindy was in Africa when Johnny sent her a picture from Peru telling her “here are your next three children.” Six months later Lindy and Johnny started the adoption process for a sibling group of three. They went from living on the street to an orphanage to moving to Montgomery.

Through Lindy’s extensive work in business and nonprofits, she has learned the importance of building hardworking, trusted teams. Her term as a U.S. Ambassador only reinforced this idea. While Ambassadors are ultimately responsible for everything that occurs in their area on their watch, they rely on a solid team to best serve American citizens abroad and represent our national interests. Lindy loved serving in Slovenia. However, Slovenia is not very far removed from being a socialist country, and Lindy saw firsthand how they are still struggling with their legacy. This experience gave Lindy a renewed appreciation of the benefits of a free society and reinstated her absolute opposition to socialism in any form. During her service, Lindy worked with a diverse group of industries and successfully brought Alabama defense products from Redstone Arsenal to Slovenia. She also worked with President Trump to have NATO nations pay their fair share to reduce tax burdens on American citizens. In addition, Lindy made strides in helping free Europe from energy dependence on Russia.

When Lindy returned home and began traveling across the state, she was welcomed by Alabamians who shared with her their desires for new leadership in Montgomery. People from all different parts of Alabama echoed the same thing, and Lindy listened.

Lindy has been motivated by every event of her life–growing up in Alabama in humble conditions with faith at the center of her world, working hard to make ends meet for her family while earning a college degree and later building a family business, helping children and families across the world achieve happier and healthier lives, and most recently serving as a U.S. Ambassador overseas–to arrive where she stands now. Every moment of Lindy’s life has been leading to this opportunity of serving and fighting for the people of Alabama.

Lynda Blanchard from Montgomery, AL has participated in elections listed below in the state of Alabama.

The below links are relevant to Lynda Blanchard from Montgomery, AL and are articles or opinion pieces published on Bama Politics. Are you Lynda Blanchard? Do you have an opinion on Lynda Blanchard? Publish an article in our opinion section and your article will appear here. A great way for our visitors to find your content and learn more about your views. Use this contact form to find out how.