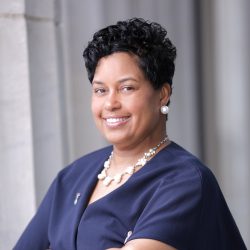 Pamela J. Laffitte is a proud Alabamian, who has dedicated her life to building a brighter future for her community, the great State of Alabama, and our nation. She attended, and later graduated from, Bishop State Community College, where she was elected by the student body to Freshmen Class President, President of the Student Government Association, Miss Bishop State Community College, 1st Runner-Up to Miss Homecoming, and recognized nationally in the publication, “Who’s Who Among Junior Colleges” and “Outstanding Young Women of America” (1991). Pamela also went on to graduate from Faulkner University with her Bachelor of Science in business degree with a business management emphasis. She was awarded two semester credit hours from Central Texas College for completion of a United States Air Force Reserve’s Leadership Development Program. She also completed requirements at Air University for completion of Airman Leadership School. She’s a graduate of Southwest Alabama Police Academy and was awarded a Jail Management Training Certificate and a certificate in 2016 from the Alabama Jail Training Academy, which was presented by the Mobile County Commissioners.

Beyond her education, Pamela served 14 years and 8 months as a member of the United States Air Force Reserves, and during Basic Military Training (BMT), Pamela served in a leadership role as Dorm Chief. The flight she led graduated as Honor Flight W024 BEST OF BEST on October 12, 1994. Pamela played pivotal roles in the execution of Operations Noble Eagle, Enduring Freedom, and Iraqi Freedom. She excelled in handling tough situations and volunteered many times to provide the critical personnel expertise required to support the mobilization of more than six hundred reservists after the terrorist attack on September 11, 2001.

While a member of the United States Air Force Reserves, Pamela was employed with the Mobile County Sheriff’s Office, where she has invested almost 24 years of tenured service. Pamela rose through the corrections rank from Corrections Officer, Corrections Corporal, and presently a Corrections Sergeant. Pamela continues to exemplify the Air Force’s Core Values: Integrity, Service Before Self, and Excellence in all she does. She’s been nominated and awarded Corrections Officer of the Month twice, four Longevity Awards and service ribbon for continuous service, the Mobile County Sheriff’s Office (MCSO) Commander’s Commendations for Outstanding Service and Devotion twice, the Letter of Highest Commendations twice, and the MCSO Award of Excellence for Demonstrating Faithful Attention to Duty and Unusual Achievement.

On top of her service to the Mobile community, Mobile County Sheriff’s Office, and the Metro Jail, Pamela assisted educators. Prior to the past pandemic, she carried out their classroom instructions for their students, which assisted in educating the future generations of Alabamians when working in her capacity as a substitute teacher in the Mobile County Public School System. Pamela is a member of Corpus Christi Catholic Church, where she is a member of the Altar Society, Women of Mary, and served as a past lector. She was elected in 2018 to the State Democratic Executive Committee; elected to Young Democrat County Commission District 2 in 1996; and serves as a member of the Alabama Democratic Party, Alabama Democratic Conference, Mobile County Democratic Executive Committee, and Mobile County Democratic Conference (MCDC), since the leadership of the late Honorable Judge Thomas Figures, who was serving as MCDC's County Chairman during her initial membership in the early 1990s. Under the leadership of the late Honorable Judge Thomas Figures, she served as MCDC's past Chairman of Youth Affairs. She was a former board member of the Mobile County Merit System Employees Association, and formerly participated in Project H.O.P.E. (Helping Offenders Pursue Excellence) initiative (Re-Entry) as a demonstrated team member under the leadership of former U.S. Attorney Kenyen Brown for the Southern District of Alabama.

Pamela J. Laffitte from Mobile, AL has participated in elections listed below in the state of Alabama.

The below links are relevant to Pamela J. Laffitte from Mobile, AL and are articles or opinion pieces published on Bama Politics. Are you Pamela J. Laffitte? Do you have an opinion on Pamela J. Laffitte? Publish an article in our opinion section and your article will appear here. A great way for our visitors to find your content and learn more about your views. Use this contact form to find out how.