Who is Stacy Lee George? 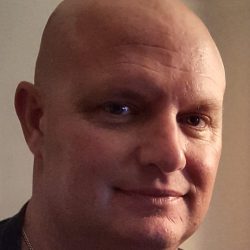 Stacy George was born in 1969 in the small town of Arab Alabama. At a young age, Stacy learned quickly what it was like to, “earn your keep”, as he was part of a salt of the earth type of American family. Stacy’s father, Henry, very seldom had any days off as he worked the nightshift at 3M, drove a truck delivering clothes for a sewing company, and drove a bulldozer for a local coal mining company. Henry would let young Stacy tag along as he drove a large truck and even sometimes brought him to the coal mine. These adventures for Stacy would instill hard work, integrity, character, and respect for the backbone workers of this state and country. However, at age twelve, Stacy’s world would change as Henry was paralyzed from the ribs down due to a tree trimming accident.

Stacy and his family quickly made adjustments and at the age of only twelve years old, Stacy got his first job pulling ragweeds and budding peach trees at Throwers Nursery in Baileyton. After working for Throwers Nursery Stacy went to work for Southerland Construction until graduating from Brewer High School in June of 1987. After graduating from Brewer High School, when most of Stacy’s friends were going to the beach to celebrate, Stacy went to work for Wyle Laboratories running vibration control in the Dynamics Laboratory. Over the next 10 years, Stacy would travel around the United States building a diverse resume working for companies such as NASA, the Department of Defense, Boeing, Lockheed Martin, SCI, Wright Patterson Air Force Base, nuclear plants located in Arkansas and Louisiana, and currently serves as an Alabama Corrections Officer. From 1997 to 2000 he worked for Amtec Corporation until he won his county commission seat for Morgan County.

In 1997 Stacy stumbled across his true passion while pursuing engineering at Calhoun Community College. During his tenure at Calhoun Stacy came across a course in Political Science and became absolutely fascinated with politics. Later that year, Dr. Waymon Burke nominated Stacy for the 1999 Political Science Student of the year. Stacy ended up winning that award, which propelled him to run for office in 2000.

Stacy’s conservative values coupled with his passion for politics, fairness, transparency, and people have kept a fire burning inside of him as he gained the necessary experience working from the bottom to the top and bringing Alabama Government corruption to the people’s feet.

As Governor of Alabama, Stacy believes it is time to bring the Government back to the working people of this state. Stacy pledges to stand for you and with you as we bring ethics to the forefront with the goal of unifying Alabama. The time is up for talking politicians, backroom deals, and empty political promises. It’s time to stand with Stacy George. Stacy will never shut down businesses under his leadership and will not raise taxes!

Stacy Lee George from Arab, AL has participated in elections listed below in the state of Alabama.

The below links are relevant to Stacy Lee George from Arab, AL and are articles or opinion pieces published on Bama Politics. Are you Stacy Lee George? Do you have an opinion on Stacy Lee George? Publish an article in our opinion section and your article will appear here. A great way for our visitors to find your content and learn more about your views. Use this contact form to find out how.