Who is Tim James? 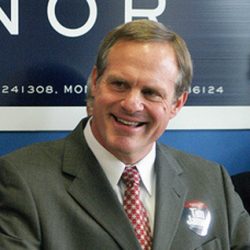 Tim James is an entrepreneur and business leader, with deep roots in Alabama. His experience spans many sectors, including construction, transportation, and finance. He bought his first business while in his 20s and has grown multiple ventures into successful enterprises.

Currently, he serves as the president of Tim James Inc., a business that uses private investment resources to build much-needed infrastructure like bridges and roads. In this role, he has been able to help meet public needs in places where the government has been too slow to act.

Tim was born in Opelika and has lived in Greenville most of his life. He played running back for Coach Pat Dye’s Auburn University football team. He graduated from the School of Business with a bachelor's degree in finance in 1985.

Tim owns his faith in Christ as the foundation of his life. He met his wife Angela when they both attended Auburn University together. They have been married for 38 years and have three children and three grandchildren.

Tim's background in business and his strong family ties have shaped his conservative views on politics. He is universally noted as a solid conservative who stands ready to defend Alabama against liberal efforts to wage a culture war on the bedrock elements of America’s foundation: faith, family, and freedom.

Tim's father, Fob James, was a two-term Governor of Alabama.

Tim James from Opelika, AL has participated in elections listed below in the state of Alabama.

The below links are relevant to Tim James from Opelika, AL and are articles or opinion pieces published on Bama Politics. Are you Tim James? Do you have an opinion on Tim James? Publish an article in our opinion section and your article will appear here. A great way for our visitors to find your content and learn more about your views. Use this contact form to find out how.