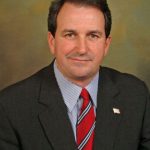 To amend Section 36-9-7 of, and to repeal Section 36-9-8 of, the Code of Alabama 1975, relating to vacancies in the office of United States Senator; to provide for filling vacancies by appointment of the Governor until the next general election.