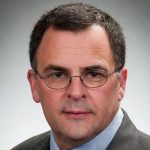 HJR93 190149-3 By Representative Pringle RFD: Rules First Read: 23-JAN-18 HJR93 ENROLLED, House Joint Resolution, COMMENDING RONALD L. JONES FOR OUTSTANDING PROFESSIONAL ACHIEVEMENT. WHEREAS, after receiving word on January 9, 2018, of his upcoming retirement, highest commendations and congratulations are herein proudly presented to Ronald L. Jones for outstanding professional achievement as Chief Examiner of the Alabama Department of Examiners of Public Accounts; and WHEREAS, Mr. Jones has completed his fifth seven-year term as Chief Examiner and has been instrumental in the success of the department as it has performed thousands of audits of various state and local agencies and entities throughout the years; and WHEREAS, Mr. Jones earned his Bachelor of Science Degree in Accounting from Troy University; he is retired from the Alabama Air National Guard after almost 33 years of selfless service at the rank of Major; and WHEREAS, he began working with the department in 1970, and is credited with founding the Operational Audit Division; Mr. Jones serves as the state representative for the Southeastern Intergovernmental Audit Forum and is a past president of the National State Auditor's Association (NSAA) HJR93 and the National Association of State Auditors, Comptrollers and Treasurers (NASACT) in which he has served on numerous committees over the years; and WHEREAS, Mr. Jones is also an active member of the Association of Government Finance Officers Association (GFOA), the Association of Certified Fraud Examiners (ACFE), and the American College of Forensic Examiners International (ACFEI); and WHEREAS, through the years, Mr. Jones has earned immense respect for his tireless dedication and exceptional abilities throughout our great state, and he is truly deserving of special recognition; now therefore, BE IT RESOLVED BY THE LEGISLATURE OF ALABAMA, BOTH HOUSES THEREOF CONCURRING, That on the occasion of his retirement as Chief Examiner of the Alabama Department of Examiners of Public Accounts and in recognition of his distinguished career, highest commendation is herein conveyed to Mr. Ronald L. Jones, for whom a copy of this resolution is provided in deepest admiration and appreciation, along with sincere best wishes for all future endeavors. HJR93 Speaker of the House of Representatives President and Presiding Officer of the Senate House of Representatives I hereby certify that the within Act originated in and was adopted by the House 30-JAN-18. Jeff Woodard Clerk Senate 01-FEB-18 Adopted