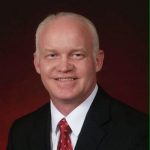 HR375 192851-1 By Representative Standridge RFD: First Read: 13-MAR-18 192851-1:n:03/12/2018:DSM/th LSA2018-975 MOURNING THE TRAGIC DEATH OF DAVID KLEIN. WHEREAS, on April 7, 1977, House Joint Resolution 371 by Representative Joe Brindley became Act Number 164 of the 1977 Regular Session and is entered on page 224 in Volume f the 1977 Acts of Alabama; the original of this resolution was destroyed in a fire; in an effort to further the memory of this incredible young Alabamian, the words of that resolution are restated by this body as follows: "WHEREAS, the Legislature of Alabama was shocked and saddened to learn of the tragic and untimely death of David Klein of Blount County, Alabama, on March 13, 1977, as the result of a boating accident on the Warrior River; and "WHEREAS, David was a young high school student of unlimited potential who had been recommended for an appointment to the Air Force Academy; he was valedictorian of his senior class and president of the student body of Susan Moore High School, and was a member of Future Farmers of America; and "WHEREAS, young David Klein was an outstanding athlete having been a three-year starter in both football and basketball, was captain of both teams, was named all-county in football and basketball, and was honorable mention for all-state; and "WHEREAS, he was a lover of nature who exhibited throughout his short lifetime a youthful and aspiring outlook, vivacity and a warmth of personality that served as an inspiration to all those privileged to know him; he was beloved of family and friends, and will be sorely missed by them all; now therefore, "BE IT RESOLVED BY THE LEGISLATURE OF ALABAMA, BOTH HOUSES THEREOF CONCURRING, That we grievously mourn, and do deeply regret, the loss of David Klein who, in this life, was denied his dream by an untimely death. "BE IT FURTHER RESOLVED, That a copy of this resolution be sent to his parents, Mr. and Mrs. Jim Klein, and his brothers, Wesley, Jeff and Tommy, that they may know of our heartfelt sympathy and that we share their sorrow. "Approved April 7, 1977. Time: 4:00 P.M." BE IT RESOLVED BY THE HOUSE OF REPRESENTATIVES OF THE LEGISLATURE OF ALABAMA, That we restate this 1977 resolution mourning the tragic death of David Klein for appropriate presentation and display to the family and friends of David Klein.