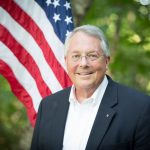 HR478 193774-1 By Representative Mooney RFD: First Read: 22-MAR-18 193774-1:n:03/21/2018:JEC/jec LSA2018-1467 COMMENDING DR. DAVID POTTS ON BEING NAMED CHANCELLOR OF JUDSON COLLEGE. WHEREAS, highest commendations are proudly presented to Dr. David Potts on being named Chancellor of Judson College; and WHEREAS, during his distinguished 27-year tenure as Judson's 22nd president, Dr. David Potts made numerous improvements at the college, served as a powerful voice for the Baptist faith, and affected positive social change; and WHEREAS, among his many inspirational deeds is his collaboration with Kachin Theological College and Seminary, an indigenous Baptist institution in northern Myanmar; over the past 18 years, 10 young Kachin women had the opportunity to study music, theology, and English at Judson free of charge, before returning to their home country to serve as members of KTCS faculty and staff; and WHEREAS, in 2013, he received the James T. Rogers Distinguished Leadership Award for Outstanding Contributions to Higher Education by the Southern Association of Colleges and Schools Commission on Colleges; and WHEREAS, through the years, Dr. David Potts has earned widespread admiration and respect for his tireless dedication and exceptional abilities, and his record of achievement is indicative of the excellence he will bring to his new role; now therefore, BE IT RESOLVED BY THE HOUSE OF REPRESENTATIVES OF THE LEGISLATURE OF ALABAMA, That Dr. David Potts is honored and commended, and this resolution is offered to him in deepest admiration and appreciation for his immeasurable service, as well as with sincere best wishes for continued success in all future endeavors.