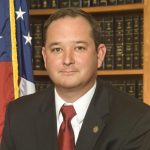 To create the Protect Alabama Small Businesses Act; to provide legislative intent; to regulate the conduct of franchisors and their representatives to prevent fraud, unfair business practices, unfair methods of competition, impositions, and other abuses upon franchisees in the state; to address requirements for the sale, transfer, or assignment of franchises, and for the mandatory repurchase by a franchisor of a franchise or an interest in a franchise, and for the repurchase of certain assets, including inventory, supplies, equipment, goodwill, and furnishings, upon termination, nonrenewal, or expiration of a franchise; and to require the compensation of a franchisee for the fair market value of the business upon termination or nonrenewal without good cause by the franchisor of the franchise.

This act shall be known and may be cited as the Protect Alabama Small Businesses Act.

The Legislature finds and declares that the welfare of franchisees, including the success and failure of their franchise businesses, greatly affects the general economy of this state, the public interest, and the public welfare. The intent of the Legislature is to promote fair business relations between franchisees and franchisors and to protect franchisees against unfair treatment by franchisors.

For the purposes of this act, the following terms shall have the following meanings: (1) AFFILIATE. A person controlling, controlled by, or under common control with another person or, in the case of a business entity, the officer, director, or other person in control of the activities of the business entity. (2) AREA FRANCHISE. A contract or agreement, in writing, through which a person is granted the right, for consideration in whole or in part, to do any of the following: a. Sell or negotiate the sale of a franchise in the name or on behalf of the franchisor. b. Become an area developer and develop a franchise for the benefit of that person or affiliates of that person. (3) AREA FRANCHISEE. The owner of an area franchise. (4) FAIR MARKET VALUE. The price at which the property will change hands between a willing buyer and a willing seller, neither being under any compulsion to buy or sell, and both having a reasonable knowledge of relevant facts. (5) FRANCHISE or FRANCHISE AGREEMENT. a. A contract or agreement, in writing, between two or more persons for which all of the following are provided: 1. A franchisee is granted the right to engage in the business of offering, selling, or distributing goods or services under a marketing plan or system prescribed in substantial part by a franchisor. 2. The operation of the franchise business pursuant to that marketing plan or system is substantially associated with the trademark, service mark, trade name, logotype, advertising, or other commercial symbol of the franchisor designating the franchisor or its affiliate. 3. The franchisee is required to provide, directly or indirectly, a franchise fee. b. The term franchise or franchise agreement includes an area franchise. (6) FRANCHISE BUSINESS. A business unit that is owned or operated by a franchisee and that is subject to a marketing plan or system prescribed by the franchise. (7) FRANCHISE FEE. A fee, charge, or the provision of a service, which a franchisee agrees to pay or provide, directly or indirectly, to or for the benefit of the franchisor for the right to enter into or continue a franchise. (8) FRANCHISEE. A person to whom a franchise is offered or granted. (9) FRANCHISOR. A person who grants a franchise to a franchisee. (10) FRAUD. Actual fraud or constructive fraud as normally defined, in addition to the following: a. A misrepresentation of a material fact. b. A promise or representation not made honestly and in good faith. c. An intentional failure to disclose a material fact. (11) GOOD CAUSE. Incudes any of the following: a. The current use of illegal drugs. b. Indictment for any crime involving moral turpitude, fraud, or misrepresentation. c. Commission of any act that would constitute a felony and that would adversely impact the business or reputation of a franchisor. d. Fraud. e. Misappropriation or embezzlement of franchisor funds or property. f. Willful conduct that is materially injurious to the reputation, business, or business relationships of the franchisor. g. Material violation of any provision of the franchise agreement. (12) PERSON. A natural person, corporation, limited liability company, association, partnership, trust, or other business entity and, in the case of a business entity, any other affiliate of that business entity. (13) SALE. The issuance, transfer, agreement for transfer, exchange, pledge, hypothecation, or mortgage in any manner or form, whether by transfer in trust or otherwise, of any goods or interest therein, or of any franchise related thereto, for a consideration, and any option, subscription or other contract, or solicitation, looking to a sale, or offer or attempt to sell in any form, whether in written or oral form, for a consideration.

The following rights and prohibitions govern the relations between a franchisor or subfranchisor and its franchisee: (1) The parties shall deal with each other in good faith and in a commercially reasonable manner. (2) A person, during the selling or establishing of a franchise, may not intentionally misrepresent or fail to disclose any of the following: a. The prospects or chances for success of the proposed or existing franchise. b. The known required total investment for such franchise. c. Any effort to sell or establish more franchises than is reasonable to expect the market or market area for the particular franchise to sustain. (3) It is prohibited and deemed an unfair and deceptive act or practice, or an unfair method of competition, and a violation of this section for a franchisor or subfranchisor, or an officer, agent, employee, or other representative thereof, to directly or indirectly do any of the following: a. Terminate or fail to renew a franchise agreement in violation of this act. b. Allow a franchise agreement to expire without complying with this act. c. Prevent a sale, transfer, or assignment of a franchise in violation of Section 6. d. Fail to repurchase inventory, supplies, goods, fixtures, equipment, goodwill, and furnishings in violation of

e. Violate the Deceptive Trade Practices Act in connection with its business as a franchisor, or an officer, agent, or other representative thereof. f. Without prior written disclosure to a franchisee, obtain vendor rebates, kickbacks, or other similar payments from another person with whom the franchisee does business or employs on account of or in relation to the transactions between the franchisee, the franchisor, and the other person. g. Require a franchisee to assent to a release, assignment, novation, waiver, or estoppel that would relieve any person from liability imposed under this act including, but not limited to, through the use of a disclaimer or checklist designed to avoid a protection or to limit damages under this act. h. Require a franchisee to assent to the use of a choice of law provision by selecting the law of a different state to govern the relationship of the parties. i. Restrict or inhibit, directly or indirectly, the right of a franchisee to join a franchisee association or the free association for any lawful purpose among franchisees. j. Impose upon a franchisee, by contract or rule, written or oral, any unreasonable standard of conduct. k. Require a franchisee to waive its rights to a jury trial or waive any procedure or remedy otherwise available in this state; however, a binding arbitration clause is enforceable if it complies with Section 11. l. Impose upon a franchisee, by contract or rule, written or oral, any unreasonable or overbroad noncompetition agreement. If a judge or jury finds that a noncompetititon agreement is in violation of state law, the entire noncompetition agreement is void and unenforceable. (4) A person who shows in a civil court of law a violation of this section is entitled to the remedies in Section 12.