Who is Hank Sanders? 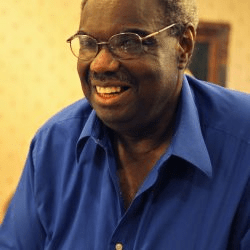 Senator Hank Sanders is the second of 13 children born to Ola Mae and Sam Sanders of Baldwin County, Alabama. He challenged the twin obstacles of poverty and racism to graduate from Douglasville High School, Talladega College, and Harvard Law School; establish a law practice; and serve as the first African American State Senator from the Alabama Black Belt. He is married to Faya Ora Rose Touré, formerly Rose M. Sanders and they have three children by birth, four by foster relationship, and many by heart.

Hank Sanders has excelled at every level of life, graduating near the top of his high school class in 1960 and college class in 1967; winning the Catherine Wardell Award after his freshman year as “the student who contributed most to Talladega College the previous year”; winning a special scholarship to Harvard Summer School after his sophomore year, and winning a special Old South Church Scholarship to attend Boston University for his junior year. He attended Harvard Law School on a Felix Frankfurter Scholarship “for poor young men who show great promise”, where he served as the President of the Harvard Black Law School Students Association. After law school, Sanders won a Ford Foundation Fellowship that sent him to Africa for a year and a Reginald Heber Smith Fellowship that sent him to Huntsville, Alabama to work for the poor with the Madison County Legal Aid Society.

In 1971, Sanders founded what became Chestnut, Sanders, Sanders, and Pettaway, LLC. At one time, it was the largest Black law firm in Alabama and one of the ten largest in the country. His law practice is one of service: helping poor and Black people save their lands; protecting people’s constitutional rights; challenging corporate abuse; and helping build strong governments to serve all people. He served as one of three (3) lead counsels in the nationally known $1.2 billion Black Farmers Discrimination Litigation.

In 1983, Sanders was elected to the Alabama State Senate where he championed issues impacting education, children, health care, women, tax reform, constitutional reform, and more. For 16 years, he served as Chairman of the Finance and Taxation Education, which handles the multi-billion dollar state education budget. Sanders (D-Selma) served in the Alabama Senate for thirty-five years and is running for SenateDistrict 23 in 2022. He has received many awards and recognitions, including being named “Legislator of the Year” by various organizations throughout Alabama and being inducted into the African Walk of Fame in Durban, South Africa.

As part of his accountability, Sanders writes a weekly column entitled Senate Sketches and Sketches, which is published in various newspapers, on the Internet and radio, and in other mediums. As of April 2022, he had written this column for 1,800 consecutive weeks without missing. Sanders participates in weekly radio programs, including co-hosting Law Lessons, Radio Sunday School, Public Conversation and more. He just recently stopped participating in a fourth, Radio Education. He has a self-published book entitled, Take a Walk in My Shoes, which is a compilation of selected Sketches. In 2004, he published his first novel, Death of a Fat Man. He speaks widely, especially to young people. His hobbies are reading, writing, and sports. He considers his most significant contribution to be his work with and for our youth.

Hank Sanders from Selma, AL has participated in elections listed below in the state of Alabama.

The below links are relevant to Hank Sanders from Selma, AL and are articles or opinion pieces published on Bama Politics. Are you Hank Sanders? Do you have an opinion on Hank Sanders? Publish an article in our opinion section and your article will appear here. A great way for our visitors to find your content and learn more about your views. Use this contact form to find out how.