Who is Kathy Warner-Stanton? 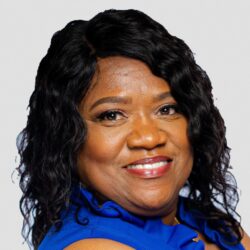 A native Alabamian with deep roots in North Alabama, Kathy graduated high school from East Limestone High School (Limestone County), received a Bachelor of Science in Computer Science from Alabama A&M University (Madison County), and currently resides in Decatur, AL (Morgan County). Before relocating back to Alabama, she spent several years stationed at various bases across the country and abroad as a military spouse.

Kathy began her career as a Computer Specialist for the federal government—a role she served for over ten years—before pursuing employment opportunities within corporate America. During her time working in the private sector, she was able to rise through the ranks to Programming Project Manager while simultaneously earning her Master’s in Management from Troy State University and raising her young children.

Whether it was being bussed into a newly-desegregated school system, becoming a first-generation college graduate, quickly climbing the corporate ladder in a male-dominated field, or earning her Master’s as a working single mother, Kathy has never backed down from a challenge.

And that is why Kathy is running to represent Alabama’s 5th District—because she believes its citizens deserve a true voice in Washington as well as a representative who has their best interest at heart. She has spent her whole life working hard and serving others, and she intends to continue that fighting spirit all the way to the halls of Congress, advocating for positive change in the lives of those in her district and across the state of Alabama.

Kathy Warner-Stanton from Decatur, AL has participated in elections listed below in the state of Alabama.