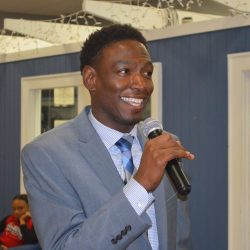 Jeremy Askew Gray is an accomplished public servant, entrepreneur, and community leader. He presently serves as the State Representative for District 83 in the Alabama House of Representatives. Representative Gray is passionate about elevating his community. His principles of community empowerment and engagement are a result of an upbringing in a strong family and a desire to improve his community.

Representative Gray is a native of Opelika, Alabama and was a three-sport athlete at Opelika High School. He gained notoriety as a high school football player, and his athletic ability earned him a scholarship to North Carolina State University where he was a standout player. His athletic ability in conjunction with leadership skills earned him the role of team captain. During his time as a college athlete, Representative Gray was an honor student and graduated with a Bachelor of Science degree in Sport Management.

After completing his undergraduate studies in 2008, Representative Gray embarked upon a career as a professional football player for the Canadian Football League and Arena Football League. He also served on the U.S. Handball Team at Auburn University. These experiences afforded him the opportunity to travel and learn about new cultures. The end of his athletic career gave him the opportunity to foster his passion for health, nutrition, and holistic wellness.

In 2015, Representative Gray returned to his home in East Alabama with the goal of giving back to his community. His desire to empower and elevate his community led him to share his passion for health and wellness through personal training. During this time, he founded “EYG” – Elevate Your Grind which is a lifestyle brand that focuses on empowerment through mental and physical wellness. This business venture led to Representative Gray being fondly known as “Mr. EYG” by members of the East Alabama community. Representative Gray also founded The Curtis House, a nonprofit organization that was named in honor of his great grandfather, Lottie B. Curtis, who lived a life of service to his family, community, church, and Country as a World War II Navy Veteran. Representative Gray embodies his great grandfather’s spirit and continues his legacy of service to the community.

Representative Gray’s leadership qualities were immediately recognized by his colleagues in the Alabama House of Representatives when they elected him to become a Minority Whip. He serves on the House Commerce and Small Business Committee, House Health Committee, House Public Safety and Homeland Security Committee, and Lee County Legislation Committee. Representative Gray is respected by his peers in both the Democratic and Republican parties and was nominated by Governor Kay Ivey to serve on the Alabama Statewide Health Coordinating Council and Innovate Alabama. Representative Gray is also recognized as a leader beyond the State of Alabama. He was invited to join exclusive groups for political leaders to include Southern Legislative Conference’s Center for the Advancement of Leadership Skills (CALS), New Deal Leaders, Millennial Action Project, and National Conference of State Legislators Early Childhood Fellowship.

The 2021 legislative session brought Representative Gray great success. During this time, he was able to pass legislation that was recognized both nationally and internationally. He sponsored legislation that lifted the 28-year ban on yoga in Alabama’s K-12 public schools. This legislation led to an invitation to discuss its impact on MSNBC’s “All in with Chris Hayes”. During the 2021 session, he also sponsored legislation for a state-level matching fund program for Small Business Innovation Research and Small Technology Transfer Research.

Representative Gray is filled with an incredible desire to obtain knowledge that will help him continue to impact his community. He is currently pursuing an Executive Master of Business Administration with a Leadership Concentration in Auburn University’s Raymond J. Harbert College of Business. He is also committed to collaborating with other pro-growth leaders to exchange ideas that may benefit his community.

Representative Gray has been recognized for his leadership and service. He was a member of Rural Leader Magazine’s 20 under 40 Top 4 and an Opelika Chamber of Commerce 20 Under 40 Alum. He was also recognized by the Opelika Chamber of Commerce as the 2021 Visionary Award recipient, Council of State Government as a 20 Under 40 Leadership Award recipient, and named 2021 Legislator of the Year by the Alabama NAACP.

Jeremy Gray from Opelika, AL has participated in elections listed below in the state of Alabama.

The below links are relevant to Jeremy Gray from Opelika, AL and are articles or opinion pieces published on Bama Politics. Are you Jeremy Gray? Do you have an opinion on Jeremy Gray? Publish an article in our opinion section and your article will appear here. A great way for our visitors to find your content and learn more about your views. Use this contact form to find out how.