Who is Katie Boyd Britt? 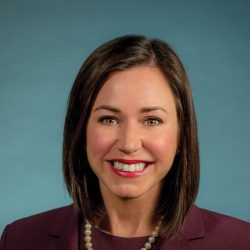 An Enterprise native, Katie Britt has spent a lifetime fighting to put Alabama first. She helped lead the charge to successfully identify good, conservative judges for the federal bench across Alabama, as well as working the confirmation of Associate Justices Neil Gorsuch and Brett Kavanaugh.

At the business council, Katie has helped advance free market principles that support job growth and prosperity for all Alabamians. She also serves on numerous committees and task forces, including the Alabama Wildlife Federation Board of Directors. Katie volunteers her time to a multitude of civic, educational, and leadership organizations, as well.

In 2015, Katie took a leave of absence from the firm to serve as Senator Shelby’s deputy campaign manager and communications director. After his successful bid for re-election, she rejoined Shelby’s team as chief of staff in 2016.

A proud Christian, wife and mother, faith and family are at the heart of Katie’s life. She is a lifelong conservative who is committed to fighting tirelessly to defend the right to life, securing and defending our borders, and putting Alabama first.

Katie resides in Montgomery with her husband, Wesley, and their two children, Bennett and Ridgeway. Wesley was a first team All-SEC and third-team AP All American as an offensive lineman at The University of Alabama, going on to play in the NFL for the New England Patriots. The family attends First United Methodist Church.

Katie Boyd Britt from Montgomery, AL has participated in elections listed below in the state of Alabama.

The below links are relevant to Katie Boyd Britt from Montgomery, AL and are articles or opinion pieces published on Bama Politics. Are you Katie Boyd Britt? Do you have an opinion on Katie Boyd Britt? Publish an article in our opinion section and your article will appear here. A great way for our visitors to find your content and learn more about your views. Use this contact form to find out how.