Who is Devyn Keith? 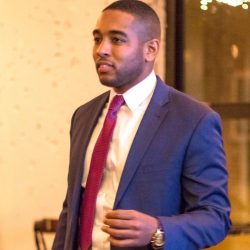 Devyn Sherad Keith was sworn in as a member of the Huntsville City Council in November 2016 setting a record as the youngest council member elected to Huntsville’s legislative branch of government. In this role, Devyn represents District 1, an area that covers much of northern Huntsville including Alabama A&M University and stretching into the downtown core.

Devyn was born and raised in Huntsville, Alabama, and is a proud product of its large community network. Driven by a passion for public service and a deep connection to the people of his community, Devyn is a true believer that “Huntsville is the best city this side of heaven.”

Devyn received his undergraduate degree from Samford University in Birmingham, Alabama, and was a scholarship player for the Samford Bulldogs football team. While in Birmingham, Devyn launched the nonprofit Brothers of 1 Voice, an effort aimed at educating, empowering and advocating for youth who aged out of state support services.

A student of the McCormack Graduate School of Policy and Global Studies at the University of Massachusetts in Boston, Devyn graduated with his Master’s in Public Administration and while in Boston, worked in leadership roles for area nonprofits and government. During his time in the City on a Hill, he developed working relationships with leaders at the federal, state and local levels, learning innovative ways to effect meaningful change with tangible impact. Despite opportunities extended for him to plant in Boston or D.C., Devyn chose to return home to North Huntsville, where he could help in the continued efforts to build up a community that helped build him.

Devyn is an assistant professor in the Department of Political Science at Alabama A&M and currently serves on the Board of Directors for the Cap & Gown Project, a Huntsville-based nonprofit seeking to provide opportunities and mentorship for underrepresented secondary school students who wish to pursue a college education.

Elected by his fellow Council Members as President in 2018 and again in 2019, Devyn is currently the youngest serving Council President in Huntsville’s history. He maintains his passion to bring about positive change and has kept a promise to live in four different communities within his district in his first term. Devyn has called Terry Heights, Glen Park and now Meadow Hills home over the past three years, a decision he credits with helping him better understand the people of North Huntsville and, ultimately, a choice that has made him a more compassionate advocate for the residents of District 1.

Devyn Keith from Huntsville, AL has participated in elections listed below in the state of Alabama.

The below links are relevant to Devyn Keith from Huntsville, AL and are articles or opinion pieces published on Bama Politics. Are you Devyn Keith? Do you have an opinion on Devyn Keith? Publish an article in our opinion section and your article will appear here. A great way for our visitors to find your content and learn more about your views. Use this contact form to find out how.

The below links are relevant to Devyn Keith from Huntsville, AL and were found via our own research or sent to us from readers like you. These links are not associated with Bama Politics.