Who is Debbie Wood? 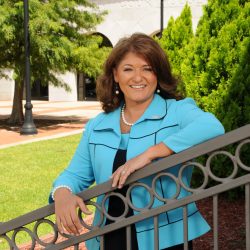 Alabama native Debbie Hamby Wood was born in Valley, attended Beulah High School and Southern Union State Community College, and recently completed a Bachelor’s degree at Faulkner University. Since 2000, Wood has been a small businesswoman, owning and operating Century 21 Wood Real Estate in Valley. Beginning in 2002, she served four terms as the District 6 Representative on the Chambers County Commission, and was the first female to serve as Commission Chair. In 2014 she was honored to serve as President of the Association of County Commissions of Alabama. Following that year of service to Alabama, Debbie was appointed to serve as a representative to the National Association of County Officials Board in Washington D.C. In 2018 she was elected to the Alabama House to represent District 38, and is currently seeking reelection to her second term in the House. For the 2019-2020 Legislative session she served on the House County and Municipal Government Committee, Lee County Legislation Committee, Ways and Means Education Committee, and the Urban and Rural Development Committee.

In 2015 Debbie was diagnosed with breast cancer, and following successful treatment has now been cancer-free for six years. She continues to be a vocal advocate for early detection and screening, as well as for post-treatment support for breast cancer survivors.

Debbie is focused on bringing positive change to her District and the state, and works to make Alabama a better place for her children and grandchildren. One of her favorite sayings is “You make a living by what you get, but you make a life by what you give.” Through her activism and advocacy, her local involvement and now as a Representative, Debbie Wood is working to make life in Alabama better for all of us.

She and her husband of 30+ years, Bobby, live in Valley. The couple have two children and three grandchildren, and attend Langdale United Methodist Church.

Debbie Wood from Valley, AL has participated in elections listed below in the state of Alabama.

The below links are relevant to Debbie Wood from Valley, AL and are articles or opinion pieces published on Bama Politics. Are you Debbie Wood? Do you have an opinion on Debbie Wood? Publish an article in our opinion section and your article will appear here. A great way for our visitors to find your content and learn more about your views. Use this contact form to find out how.