Who is Donnie Chesteen? 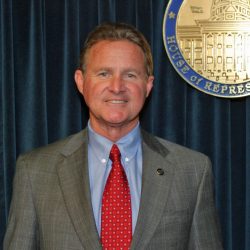 After graduating from Troy University in 1975, Chesteen began his career in education as a teacher and football coach in Geneva County. He served two schools, Geneva County High School in Hartford, (1977-1980) and Geneva High School in Geneva (1981-1987) as Head Football Coach and Athletic Director.

Chesteen left the coaching profession in 1988 and began a new career as a medical sales representative for Mead Johnson. He worked with doctors and health care professionals in the Dothan area until his retirement in 2009. During this time, he was appointed to the Geneva City Board of Education and served as its Chairman.

After retiring from Mead Johnson, Chesteen returned to education as an assistant football coach at Geneva High School and continues his love of raising cattle.

“I feel that with all of my work with my students as a mentor to young men and women, as a husband, as a father, as an administrator, and a medical sales representative, I have the type of life experience and perspective that could best serve our communities in District 87.”

Chesteen will use his lifetime of experience as an educator, cattle farmer, and medical sales representative to work with people from all walks of life to fight for the interest of the Wiregrass area. He plans to run his race based on three areas of concern: the economy, education and integrity of elected officials.

“I will do my best to continue in the tradition of the late State Representative Warren Beck and be a voice for the conservative principles that our area holds true. I will work only for the voters of House District 87, not the special interest in Montgomery who tries to control what is done in Geneva and Houston County.”

Chesteen states that he will only make one promise: “I will always have an open door, and an open phone line for my constituents, and I will vote my conscience to do what is right for the people in my district.”

Chesteen and his wife, Stephanie, have been married thirty years and they have two children: Roxanna Chesteen, a child-life specialist in Birmingham; and Christopher Chesteen, a loan officer with SB & T Bank of Geneva, and his fiancée, Kasey Zorn of Samson.

Donnie Chesteen from Geneva, AL has participated in elections listed below in the state of Alabama.

The below links are relevant to Donnie Chesteen from Geneva, AL and are articles or opinion pieces published on Bama Politics. Are you Donnie Chesteen? Do you have an opinion on Donnie Chesteen? Publish an article in our opinion section and your article will appear here. A great way for our visitors to find your content and learn more about your views. Use this contact form to find out how.