Who is James Averhart? 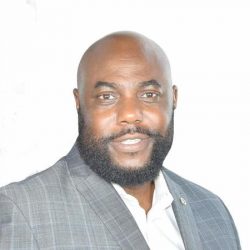 James T. Averhart, Jr, is a native of Mobile, Alabama, and the first born of three children. He is a retired United States Marine, Chief Warrant Officer Five (CWO5). James is the President and CEO of J.T. Averhart Group (JTAG), a non-profit organization that facilitates ex-offenders' re-entry into society. He is the Past National President of the Montford Point Marines Association and currently serves as Executive Director of the National Association for the Advancement of Colored People (NAACP), Mobile Unit #5044.

James enlisted in the United States Marine Corps in January 1987 as a Basic Infantrymen and would later change his Military Occupational Specialty to Military Police & Correctional Officer. He served on active duty from 1987 to 2017. He is a combat-tested veteran having served in direct combat action in Operations Desert Shield and the ground offensive in Desert Storm. Additionally, James served in support of the Global War on Terrorism, Operations Enduring Freedom (OEF) Afghanistan / and Operation Iraqi Freedom (OIF) Iraq. Retiring from the Pentagon as the head of the Marine Corps Corrections Branch, James completed 30 years 2 months and 12 days of honorable and faithful service.

James is a graduate of the U.S. Army Airborne School, Non-Lethal Weapons Instructor Course, Weapons of Mass Destruction Trainer Course, and Hostage Negotiation School. He also pursued his educational goals while serving on active military duty and earned a Bachelor of Science in Criminal Justice and a Master of Arts in Security Management from the American Military University. James furthered his education by earning a Doctorate Degree in Theology and Biblical Studies from the North Carolina College of Theology and Seminary. He is currently working toward a Doctorate Degree in Organizational Management and Leadership from Ashford University.

James T. Averhart, Jr., reached the highest rank achievable as a Warrant Officer, by being promoted to Chief Warrant Officer Five (CWO5). He retired from active military duty in the Marine Corps on October 31, 2017, after 30 plus years of Honorable and Faithful Service to The United States of America. He is a staunch advocate for Equal and Civil rights and looks forward to continuing his life’s work as a public servant to his community, state, and country.

James Averhart from Mobile, AL has participated in elections listed below in the state of Alabama.

The below links are relevant to James Averhart from Mobile, AL and are articles or opinion pieces published on Bama Politics. Are you James Averhart? Do you have an opinion on James Averhart? Publish an article in our opinion section and your article will appear here. A great way for our visitors to find your content and learn more about your views. Use this contact form to find out how.