Corruption Is Corrosive, And It’s Starting With The Birds

Whether you live in rural southwest Alabama like me or on University Boulevard in Mobile, we Alabamians have come to understand a simple truth: Our government is manipulated by big money and special interests. This blatant corruption invades and consumes every single issue we care about and is upheld by current and past state legislators, congressmen, governors, and presidents.

Recently, the Trump Administration has given us particularly horrific examples of special interest taking precedence over the interests of working-class people, especially in the form of environmental protection roll-backs. In June of 2018, the Trump Administration struck a rule which created criminal penalties for “incidental” migratory bird deaths caused by business actions. Previously, any death of a migratory bird, whether intentional (as in a bird taken by a hunter) or incidental (as with birds killed by oil spills) were monitored, reported, and penalized appropriately. With this change in legislation, only intentional deaths are subject to oversight. An Alabama hunter who accidentally exceeds his limit is subject to a greater penalty for bird deaths than any corporation that accidentally spills millions of gallons of oil into the Gulf. Both parties should be held responsible for their actions, but to fine a sportsman for a single bird and excuse a multi-billion dollar corporation for thousands of them places the responsibility solely on the private citizen.

We should all be outraged by this double standard, but it’s the scientists who are leading the charge and sounding the alarm. Noah Greenwald, the endangered species director for the Center for Biological Diversity, stated to the New York Times that the Trump Administration’s policy “lets industrial companies, utilities, and others completely off the hook.” A corresponding New York Times investigation found that in almost twenty-four different instances across fifteen states, Fish and Wildlife Services (the agency responsible for the protection of migratory birds) indicated that unless a bird had been intentionally shot the activity warranted no action. The administration has even gone further by discouraging local governments from acting to protect birds. As a result, big corporations and local governments have been able to streamline new projects without any consideration for birds with catastrophic effects. All across the country birds have been killed by oil spills and pits, construction crews, and chemicals according to government documents and emails from officials as reported by The New York Times.

I come from a family that is deeply rooted in nature. We treasure it, and we hold it in the highest regard. My dad and sister hunt regularly, and most of my extended family does as well. I am deeply worried that the actions taken by the Trump Administration as far as protections for birds are indicative of what will come in other areas of the environment, and according to scientists that concern is well-founded. Acts such as the Clean Air Act, the Clean Water Act, the Endangered Species Act, and the Federal Land Policy and Management Act are all under assault by the Trump Administration because some of the basic assumptions underlying these laws have shifted since their enactment. According to Patrick Maroun’s article, “More Than Birds,” Maroun states, “a broad or narrow interpretation of statutes like these can have a significant, and perhaps irreversible, impact on the environment.” For example, when speaking about the Clean Air Act, Maroun states, “a narrow interpretation may avoid ill-advised regulations, prohibiting the EPA from issuing rules designed to reduce greenhouse gases, (and) would undercut the goals of the Congress that created it.” Even scarier is the ways in which the Trump Administration has systematically separated science from policy. The New York Times stated that Trump’s political appointees have “shut down government studies, reduced the influence of scientists over regulatory decisions and in some cases pressured researchers not to speak publicly.” This spells “doom” for all of us. We all need these regulations to be upheld and protected. They keep our water clean, our air breathable, and our lives livable. Instead of keeping those protections, the Trump Administration has given in to the corruption brought on by special interest simply so they could make more money.

However, I know that for many, these cuts in regulations seem trivial because they are about birds. I know many are rightfully worried about a lot of other issues that are certainly more pressing. However, those of us who know and appreciate nature understand that everything is interconnected. If we allow big corporations and ignorant municipalities to run over the environment without any care for the animals and plants that they will affect, it starts a trend where eventually there is no consideration nature at all. In time, the 10 point buck your family has been watching for a few months might be the last one your family is able to hunt; It might mean that the duck hunting trips your family takes in Mobile Bay are less fruitful and less frequent. The protection of nature is a sacred duty bestowed upon all of us, and this administration with the help of its allies in Congress and in state capitols across the country has systematically shifted policy in favor of big corporations and against ordinary people who need the environment to sustain their way of life.

All of these worries are from a central source: corruption. Corruption is corroding our government and is eliminating the viability of our environment. The good news is that we have an opportunity in the upcoming elections to fix this mess before it is too late. We have candidates running up and down the ballot that are pro-science and pro-environment, and that means that they are working for your family. We need people like Kiani Gardner, a scientist from Spanish Fort, who is running for Congress in the First Congressional District. We need people like Doug Jones who after being elected in 2017 has the most bipartisan record of any Senator in Congress. We need new people who want to run on the local level to fix things in Montgomery and work to create state-level regulations that will protect Alabama’s families from whims of Washington. We need activists who are going to pressure elected officials to do the right thing even when they are surrounded by big money and special interests. The extent of the consequences of many of the Trump Administration’s actions have not yet been discovered, but one thing is certain: There will be many consequences unless we turn it around. 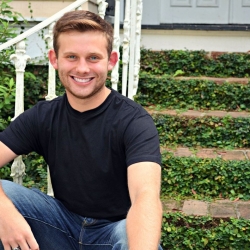 Sean Atchison is a current senior at Washington County High School and the Communications Intern with “Kiani Gardner for Congress.” In the Fall, he will join the University of Alabama community as a Freshman majoring in Political Science.