Who is Bill Holtzclaw? 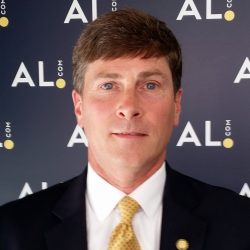 Bill Holtzclaw was born in Elaine, Arkansas in 1964. Orphaned at birth, he lived in a United Methodist Children’s Home in Little Rock until he was taken into a foster home at age 5. He was raised by a loving family in Northeast Arkansas who grounded him in Christian principals.
​
Bill enlisted in the Marine Corps after graduating high school in 1982. He married his high school sweetheart, Pam, in 1985. They have two adult daughters who are both married. Their oldest daughter and son-in-law live in Madison and have two sons. Their youngest daughter and son-in-law live in Atlanta, GA.

In 1999, he moved with his family to Madison, Alabama to serve as the Officer in Charge of the Marine Corps Ammunition School on Redstone Arsenal. They have called Madison home since then.
​​
Bill served 20 years as a U.S. Marine, retiring from active duty in 2003. After retirement Bill worked as a consultant for the Marine Corps Program Manager for Ammunition and later for Madison Research Corporation as a Contracts Specialist.

In 2008, he returned to government service to work as a Civil Servant at NASA's Marshall Space Flight Center in the Office of Procurement. At that time, Bill also entered local politics by running for and serving as a Madison City Councilman.

In 2009, Bill was asked to run for the Alabama State Senate by the Alabama Republican party. In November 2010 Bill defeated a 28-year Democrat incumbent by winning 60 percent of the vote. He served a second four-year term in the State Senate from 2014 – 2018.

Having made a campaign promise to only serve two consecutive terms, Bill did not seek reelection to the State Senate in 2018. ​He did explore a campaign for the US Congress in 2018 but decided to withdraw from the race before the qualifying period ended. Washington politics was just not for him.

Since then, Bill joined the leadership team at a local non-profit Veteran Service Organization in 2019 where he served as the Chief Programs Officer. In 2021, he decided to retire and has enjoyed the last year spending time with family, fishing, hiking, and working on old cars. Bill has since realized that after a lifetime of service to his country, state and community, he still has more to give.

Bill enlisted in the Marine Corps after he graduated High School in 1982. He retired in 2003 as a Chief Warrant Officer with 20 years of active-duty service including two combat tours: Desert Storm in 1991 and Operation Restore Hope in Mogadishu, Somalia in 1992 – 1993. In 1999, Bill moved with his family to Madison, Alabama to serve as the Officer in Charge of the Marine Corps Ammunition School on Redstone Arsenal. Bill began his career at this school in 1983 as a Private, and 16 years later returned as the Officer in Charge.

​Bill’s primary duties as a Marine were as an ammunition and explosives specialist with varying commands including artillery, Light Armored Reconnaissance, and ammunition storage facilities. Bill’s special duty assignments include service as a rifle and pistol marksmanship instructor while stationed in Japan and California, and as an Anti-Terrorist/Force Protection Officer while stationed in California. His military awards include the Meritorious Service Medal, the Navy Marine Corps Commendation Medal, the Navy Marine Corps Achievement Medal, the Armed Forces Expeditionary Medal, and the Marine Corps Combat Action Ribbon.

In 2008, Bill continued his desire to serve others by successfully campaigning for his first public office as a Madison City Councilman. Later he served as the Madison City Council President.
​​
In 2009, Bill was asked to run for a state level, partisan public office by the Alabama Republican party. As a NASA employee, this was in direct conflict with the Hatch Act for Federal Employees which prohibits a government employee from being a candidate for, or serving in, a partisan political office. In August 2009, Bill willingly resigned from NASA to announce his candidacy for the State Senate. After a 14-month campaign Bill defeated a 28-year Democrat incumbent by winning 60 percent of the vote in November 2010.

Bill was reelected to the State Senate for a second term in 2014. As a state senator from 2010 -2018 Bill served on several committees and commissions including the General Fund Budget Committee, Banking and Insurance Committee, and Education Policy Committee. He also served as the Chair of the Senate Veterans and Military Affairs Committee, Chair of the Joint Legislative Contract Review Committee, Vice-Chair of the Tennessee Valley Authority Caucus. Bill was also appointed to represent Alabama on the National Conference of State Legislatures Executive Committee for Military and Veteran's Affairs.
​
​Bill did not run for re-election to the Alabama State Senate in 2018 due to a campaign promise to only serve two consecutive terms. He did explore a campaign for the US Congress in 2018 but decided to withdraw from the race before the qualifying period ended. Washington politics was just not for him.

After leaving politics, Bill served as the Chief Programs Officer for a local non-profit Veteran Service Organization. In 2021, Bill decided to retire. Since then, he has spent a lot of time with his family. He and Pam have enjoyed some limited traveling during the pandemic. Bill has also spent time fishing, hiking, working on old cars, and doing some home remodeling projects. Over the last year, he realized that after a lifetime of service to his country, state and community, he still has more to give and thus announced his candidacy to return to the Alabama State Senate.

Bill would be honored by your vote and looks forward to getting back to work for the people of Madison and Limestone counties in Montgomery.

Bill Holtzclaw from Madison, AL has participated in elections listed below in the state of Alabama.

The below links are relevant to Bill Holtzclaw from Madison, AL and are articles or opinion pieces published on Bama Politics. Are you Bill Holtzclaw? Do you have an opinion on Bill Holtzclaw? Publish an article in our opinion section and your article will appear here. A great way for our visitors to find your content and learn more about your views. Use this contact form to find out how.