Who is Tommy Battle? 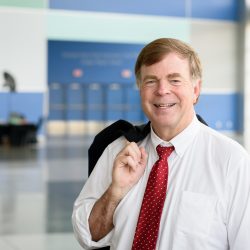 Tommy was elected Huntsville’s mayor in 2008. The values he grew up with shaped a campaign focused on fiscal responsibility, a streamlined government that supported free enterprise, economic development, and quality of life.

He would win re-election in 2012 and 2016, each time receiving more than 80% of the votes.
When it comes to budgets and management, Tommy knows mayors and city officials can’t kick the can down the road. Mayors have to roll-up their sleeves and get things done. He made promises in that 2008 campaign, and he’s kept them.

Working together with leaders across North Alabama, Tommy has helped to create more than 30,000 new jobs for the region. His collaborative approach to economic development has built partnerships with Blue Origin, Polaris, GE Aviation, and many others, and he led the recruitment effort of Mazda-Toyota to Huntsville. Creating advanced manufacturing jobs with those companies is building an Alabama workforce that is qualified and prepared to lead our state into the 21st Century.

His commitment to schools helped his city build more than $250 million in new facilities for Huntsville’s students. His commitment to education, however, is evident with “Mayor Battle’s Book Club,” a program which has provided more than 100,000 new reading books to children across the city.

Tommy’s fiscally conservative policies have had a greater than $2.5 billion impact on the local economy, led his city to 12-straight Triple-A credit ratings, created a pay-as-you-go system to build or repair more than $500m in roads, and delivered balanced budgets every year he’s held the office.

Prior to his election as Mayor, Tommy was a small business owner who served on the HEMSI Board of Control, the Solid Waste Authority Board, and was a two-time Chairman of the Early Works Children’s Museum Board. He is a member of Trinity United Methodist Church, where he has taught Bible study for 20 years and is past Chairman of the Building Committee. Tommy enjoys spending time with his son, Drew, and his wife, Lauren, and their boys George and Benjamin.

Tommy Battle from Huntsville, AL has participated in elections listed below in the state of Alabama.

The below links are relevant to Tommy Battle from Huntsville, AL and are articles or opinion pieces published on Bama Politics. Are you Tommy Battle? Do you have an opinion on Tommy Battle? Publish an article in our opinion section and your article will appear here. A great way for our visitors to find your content and learn more about your views. Use this contact form to find out how.

The below links are relevant to Tommy Battle from Huntsville, AL and were found via our own research or sent to us from readers like you. These links are not associated with Bama Politics.