This month business leaders from around the state gathered in Birmingham at the Alabama Economic Growth Summit to discuss how our state can continue to grow jobs and build our economy to be competitive across the country. The aerospace industry was among the leading topics of discussion at this summit because it is a key job creator and economic engine in our state.

The aerospace and defense industries support over 60,000 jobs in Alabama. Alabama ranks in the top five states in the U.S. with the highest number of aerospace engineers. But this didn’t happen overnight. Our state has a long and rich history in this industry. NASA’s Saturn V rocket and the technological advances that helped put Americans on the Moon were created in Huntsville-Madison County. Here in the Rocket City, we are proud to continue our efforts to be a leader in the development of new aerospace technologies. And once again, it’s going to be Alabama’s workforce that helps secure America’s dominance in space.

This is especially true today as we usher in a new age of aerospace technology. In part due to the substantial investment by private aerospace companies, including many that call Alabama home. Take a company like Blue Origin for example. Earlier this year, they broke ground on an engine production facility in Huntsville to manufacture their American-made BE-4 rocket engine. This American-made engine won’t only be used for commercial launches; Blue Origin is also currently a part of the U.S. Air Force’s National Security Space Launch (NSSL) Program, which will enable the U.S. to get off the Russian-made RD-180 engines currently being used for national security launches.

This is great news for our job market and economy. In meetings with Blue Origin, the company told me this new engine facility will add more than 300 jobs in our region and another 50 jobs at its test stand facility at NASA’s Marshall Spaceflight Center. In addition to these jobs, we will see even more benefits to our state’s economy because of private investment by Blue Origin. To date, Blue Origin has worked with more than twenty in-state companies.

It’s also great news for the national security of our country. While we continue to make great strides in American aerospace development, including the work done right here in Huntsville-Madison County, other countries are also making great strides in the industry and threatening America’s dominance in space. Earlier this year, China became the first country to land on the far side of the moon and we continue to rely on Russia to send American astronauts to space because we no longer have the capability. Thankfully, Alabama company Blue Origin is investing heavily in the development of an American-made engine to replace the Russian RD-180 and working hand-in-hand with the U.S. Air Force to ensure America remains competitive – all while creating jobs and economic growth right here in Alabama.

Alabama is also fortunate to have the great aerospace and missile defense champion Senator Richard Shelby in Congress. Senator Shelby has long supported the United States’ space industry and advocated for the development of new, American-made technology to compete against our adversaries – and he fights to bring those jobs to Alabama.

Through this industry, we’ve created thousands of jobs and stimulated economic growth across other industries as well. If we want to continue this pattern for another 100 years, we must do everything possible to strengthen this valuable industry and support U.S. space exploration and national security. I’m proud to be from a state that’s been a leader in space exploration for over 100 years during which time Madison County has advanced to become known as the propulsion capital of the world.

The finest hours for Alabama are still ahead. The time is now. Together, we must seize the moment. 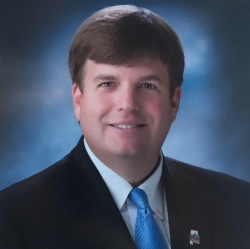