Who is Paul Sanford? 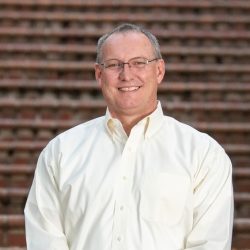 Born and raised in Huntsville, Paul was taught the values of faith, family, and fight. Being born into the Gibson family, he immediately became familiar with white barbecue sauce and the restaurant business. Paul continued his education at the Culinary Institute of America, where he graduated with a culinary arts degree. He then followed his passion for food and cooking around the country. In 1993, Paul met his wife of 27 years, Danielle, while working for Ruth's Chris Steakhouse.

After the birth of their two children, Chase (26) and Ryan (23), they both felt a calling to move back to Huntsville and raise their family back home. After years of working for some great companies Paul and Danielle decided they wanted to own and operate their own restaurant. In 2002, they opened up their own restaurant, known to the area as Little Paul’s Barbecue, a fun play off of his great grandfather's namesake Big Bob Gibson BBQ.

When Paul became frustrated with the red tape and oversight from the government, while owning his own restaurant, he decided to run for the Alabama Senate in 2008. Paul won the special election in June of 2009. Throughout his time in the Alabama Legislature, he has proven to be a vocal fiscal conservative and advocate for common sense policies that help Alabamians. Paul consistently voted against raising taxes, government oversight, and irresponsible legislation.

Paul has never been afraid to make an unpopular decision or go toe-to-toe with leadership when something wasn’t right. He has always been an advocate for small businesses, protecting all human life, balancing budgets, and protecting our constitutional rights. As an avid hunter, Paul is a lifelong supporter of our Second Amendment rights and as a Christian, he will always fight to protect the life of the unborn.

As an almost lifelong resident of North Alabama, Paul understands that our area is an incredible place that maintains a wide variety of thriving industries like defense, engineering, agriculture, and many more. We need a leader who will fight for common sense policies and push back against the Liberal agenda up in DC.

Paul wants to bring common-sense and solutions to D.C. so he can effectively and honorably represent District 5. Paul will push back on government oversight and overreach, so he can protect our Constitutional rights, conservative values, and most importantly the future of our nation.

Paul Sanford from Huntsville, AL has participated in elections listed below in the state of Alabama.

The below links are relevant to Paul Sanford from Huntsville, AL and are articles or opinion pieces published on Bama Politics. Are you Paul Sanford? Do you have an opinion on Paul Sanford? Publish an article in our opinion section and your article will appear here. A great way for our visitors to find your content and learn more about your views. Use this contact form to find out how.