Who is Chris England? 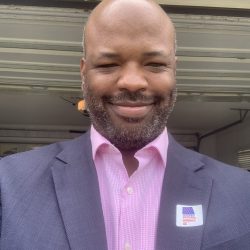 Representative Christopher J. England was born and raised in Tuscaloosa, Alabama. He received his B.A. in English and B.A. in Political Science from Howard University in 1999. He then graduated with a Juris Doctorate from the University of Alabama School of Law in 2002. After graduating from Law School, he went to work for the Tuscaloosa County District Attorney’s office as an Assistant District Attorney. In 2004, he left the District Attorney’s Office to begin working in the Office of the City Attorney for the City of Tuscaloosa where he currently serves as an Associate City Attorney.

On November 2nd, 2019, Representative England was elected to serve as the Chair of the Alabama Democratic Party becoming the first African American to hold the position in Alabama history.

He is married to Shea and they have three beautiful children; Kennedi, Autumn and CJ.

Chris England from Tuscaloosa, AL has participated in elections listed below in the state of Alabama.

The below links are relevant to Chris England from Tuscaloosa, AL and are articles or opinion pieces published on Bama Politics. Are you Chris England? Do you have an opinion on Chris England? Publish an article in our opinion section and your article will appear here. A great way for our visitors to find your content and learn more about your views. Use this contact form to find out how.